What about MY marriage, Mr. Cooper?

Unless you've given up all media for Lent (and if you did, then you wouldn't be reading this today, would you?), you're aware of the arguments that took place in front of the Supreme Court of the United States this week. Tuesday's session focused on California's Prop 8 ban of same-sex marriages and on Wednesday the Court heard arguments related to the Defense of Marriage Act. For the record, I'm for marriage equality and like lots of other people, changed my Facebook profile picture to reflect that, although I saw this and thought it very funny: 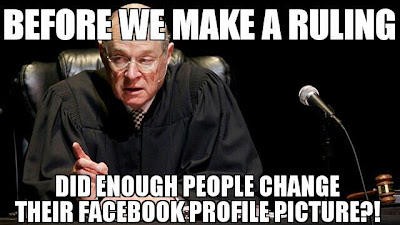 As I watched news programs and read recaps of the court sessions, I was really struck by something. On Tuesday, Justice Elena Kagan asked Charles Cooper, the attorney representing Prop 8 supporters, this question: "It seems as though your principal argument is that same-sex and opposite-sex couples are not similarly situated because opposite-sex couples can procreate, same-sex couples cannot, and the State's principal interest is in regulating procreation. Is that basically correct?" And Cooper said that yes, it's correct.

Then some hilarity ensued in which Kagan said that maybe opposite-sex couples over the age of 55 shouldn't be allowed to marry because they "don't help us serve the government's interest in regulating procreation through marriage." And Cooper tried to say that it would be "very rare that both parties to the couple" over 55 would be infertile. To which Kagan had to give him a sex-ed lesson.

So here's my question: What about my opposite-sex marriage? I got married at 23 and at the time had every intention of having children. It wasn't in the cards for us and now I'm 45 and there will be no procreating because a) we're in our 40s and don't want to have babies at this point and b) a tiny little matter of the hysterectomy I had last summer. So should my marriage now be considered illegal?

You can say I'm being ridiculous, and maybe I am, but frankly, the argument that same-sex couples shouldn't marry because they "can't procreate" is ludicrous. Agree with me or don't, but I'm not sorry for taking that position.