True confession time: Part of the reason Aaron and I took so long to get started on our pilgrimage is that we knew we had to start out at Sushi Rock, and we weren't really looking forward to it. We'd never been there, but we hadn't heard great things about it. However, it's remained open for almost two years in a prime location that has previously struggled to keep restaurants so last week we decided to get it over with. 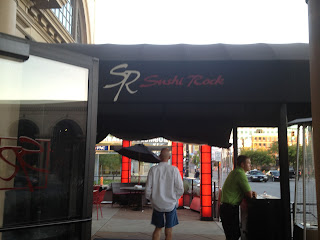 The Short North location of Sushi Rock is actually their third; there are two in the Cleveland area. They have a pretty good happy hour with $4 martinis, $4 maki rolls and reduced prices on other drinks and small plates. Now, you should know that the happy hour menu is only available in the bar or lounge area, and there is no happy hour on Wednesdays because that's "Tsunami Night," with half-price sushi. We were there on a Monday and we preferred lounge seating so we indulged in some happy hour specials. However, we were not able to sit in the "VIP" section (apparently you can apply to become a VIP and then I guess you get to sit in that section of the lounge?). They also have some nice patio seating, and although we sat indoors, the doors were open to the patio which was really lovely on this late summer evening.

Oddly enough, they serve not only sushi, but also steaks (apparently the name Sushi Rock is meant to signify "surf and turf"). We're saving our steak meal for Hyde Park across the street so we stuck mostly with seafood and sushi-type dishes.

We started off with calamari in a light tempura batter and a sweet and spicy sauce. Aaron is pretty picky about calamari but he declared it a winner, and I agree. We also got a spicy tuna roll which, while "better than grocery store sushi" (per Aaron), had a weird texture. The tuna was minced or ground or something. Also, the soy sauce on the tables is the low-sodium version. I don't mind that, but I think it's odd that they don't have both options. I read a review early on that someone requested "real" soy sauce and was told that they had none.

The true sushi/sashimi menu isn't very extensive and we opted to get "Big Rolls." Aaron had the Thunder Roll - soft shell crab, cayenne pepper, tuna and avocado with a sweet chili glaze. It wasn't horrible, and he ate it all, but the chewiness of the crab was annoying. I chose the Golden Dragon - tempura shrimp, spicy tuna, salmon, crab, avocado, masago and mango. I was hoping for a nice sweet and spicy combo, and it had that, but to a lesser degree than I was hoping. Still ... not bad. And just to mix things up we ordered some Parmesan Truffle Fries - a tasty treat.

The verdict: better than we expected, and we would not automatically nix it, but with so many fantastic places to dine in Columbus, Sushi Rock won't be at the top of our list.

Aaron and I live in an area of Columbus called the Short North (and within that, we live in Italian Village, but I digress). The Short North is located just barely north of downtown Columbus, and is known for its art galleries, shops and restaurants. For several months now, we have been discussing a new adventure. We've decided that we're going to eat at every restaurant in the Short North. We have no time constraints, so this could take 3 months, or a year, or infinity (highly doubtful). We're tentatively calling it the Short North Restaurant Odyssey, but we're open to suggestions. 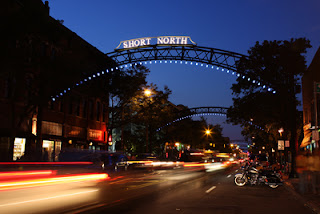 Recently we sat at a favorite bar (the R Bar, not on our journey) and detailed the list of restaurants and the Rules. This was done on cocktail napkins, because you know that's how all great ideas are conceived.

First up: Sushi Rock. We'll be reviewing each experience here, and sometimes Aaron will be the guest blogger. I hope that even if you're not a Columbus-ite you'll follow us in this most excellent journey.

When you lose a parent (or any close family member or friend), the year after their death is full of Firsts. First Thanksgiving, Christmas, birthday... and each one brings emotions that you may not expect. Today, nearly a year after my dad died, I'm experiencing a First that completely snuck up on me.

My dad was a sports fan. He liked golf and tennis and college basketball, and while he didn't watch a ton of major league baseball, he was glued to the Little League World Series every year. One of the sports that he and I shared a love of was college football. My mom and brother are also college football fans, but living in western Pennsylvania in the 70's and 80's we had a choice to make: Pitt or Penn State. My dad and I were Penn State fans.

Every year I look forward to the beginning of football season. I love football Saturdays and I have no problem planting myself in front of the TV all day and evening to watch any game. This year I haven't felt as excited. I know that a lot of this feeling has to do with the off-field issues at Penn State. I won't go into all that here except to say that I hate what went on and I'm angry with those responsible and I'm fine with the sanctions. But I'm still a fan.

What I finally realized this morning while watching Gameday on ESPN is that a bigger part of my not-so-enthusiastic attitude is an absence that has nothing to do with who is coaching or playing. This year, I can't call my dad after a big play. I won't hear his voice on the phone saying "what's going on with our team?" Who knew that something as (truly) insignificant as football would stir up all these feelings? Not me.

So I think that today, while I'll definitely have the games playing on TV, I'll also keep myself busy with other things.