The Most Unpredictable Oscars

Longtime readers might remember that in the past I've done some predicting of Oscar winners. This year I managed to see all eight of the Best Picture nominees and while I've said many times before that it's kinda silly to award a "best" picture, this year I'm having a really hard time figuring out which one I think will win. And I don't think I'm alone. Entertainment Weekly had six anonymous industry experts make their predictions/pick their favorites, and all six chose a different winner for Best Picture. 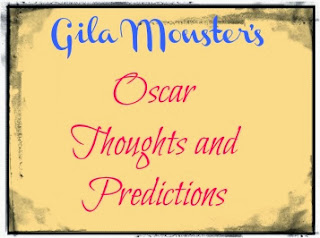 Best Picture (in the order in which I saw them):

Green Book - When I saw this movie, I really liked it. Then I read more about it and now I'm just not so sure. In fact, there are a few of these "based on true events" nominees that I wish I had never found out just how much dramatic license (or lack thereof) is taken. I love me some Viggo Mortensen, but this is no Blouse Man (shout out to my HOM girls). But Mahershala Ali is pretty fantastic, as he is in pretty much everything.

BlacKkKlansman - The premise of this film falls under "you couldn't possibly make it up so it must be true." I've never watched "Ballers," so I haven't seen John David Washington but damn, if I closed my eyes, I'd swear it was Denzel. It seems weird to say that I really enjoyed this movie, given the subject matter, but I did like it, and I'm glad to see Spike Lee back in the mix.

Bohemian Rhapsody - Queen's music is part of the soundtrack of my life. I really did love this movie for the entertainment, but as a biopic it felt pretty sanitized and safe. I mean, I'll probably watch it again. I just don't know that it's a "Best Picture."

Vice - Christian Bale is good, no doubt. This movie just did not knock my socks off.

Black Panther - I did not get to see this in the theater, and I wish I had because visually, it's stunning. I'm also not a comics/superhero aficionado but I enjoyed this movie, especially the strong female characters.

Roma - Black and white, in Spanish with subtitles, not much action. But it's a beautiful film.

The Favourite - Spectacular costumes and fantastic acting. I know a lot of critics love this movie. I didn't hate it, but it felt like it was longer than it actually was and I totally get why it's nominated, but I'm probably not voting for it.

A Star is Born - This movie made me ugly cry. I loved it a lot. I think Bradley Cooper should have at least been nominated for best director. If Shallow doesn't win for original song there's something wrong, especially because that's probably the only award the film will win.

Picture: I would vote for A Star is Born, but I think Roma will win.
Director: Alfonso Cuaron, though I'd love to see Spike Lee win.
Actor: Rami Malek will win. I would vote for Bradley Cooper (and if the Academy wants to reward him for the directing snub, they might vote for him too).
Actress: Glenn Close. Hers is the only movie in this category that I didn't see. My vote would probably go to Melissa McCarthy.
Supporting Actor: Mahershala Ali, but Richard E. Grant was pretty great.
Supporting Actress: Regina King. I also haven't seen her movie (damn streaming platforms) but I love her and she seems like a shoo in. The Favourite ladies were both fantastic but they'll probably split the vote.

As in prior years, we also watched the shorts so my predictions for those are:

It's been a super long time since I've linked up with Steph and Jana for Show Us Your Books, so I'm going to a quick take of some of my favorites from the past month several months ... OK, YEAR.

Nine Perfect Strangers by Liane Moriarty - I've read several Moriarty books and, while this wasn't my favorite of hers, it did not disappoint. I do have one nitpick - the "nine perfect strangers" who are all at a health spa are not completely strangers to each other. There's a married couple and a family of three in there. But anyway, I did enjoy it. Holy multiple POVs, Batman!


We're Going to Need More Wine by Gabrielle Union - I used to have an Audible membership. Like most auto-subscribe things, I fell behind and realized I needed to cancel it but I had 6 credits and had to use those before I canceled. I ended up with all memoirs. One was Judy Greer's (I Don't Know What You Know Me From: Confessions of a Co-Star) and it was fine but not much stayed with me. Gabrielle Union's memoir felt very open and honest. She talks about some serious shit, including colorism, infertility, and her own sexual assault. There are also absolutely some lighthearted moments and I loved listening to her.


Before I Let You Go by Kelly Rimmer - At times a tough read about a woman who has always had to bail out her sister who is a drug addict and now shows up pregnant. I gave this 5 stars on Goodreads because it made me cry and pretty much any book that can do that will get 5 stars from me.


Currently reading: The Tattooist of Auschwitz by Heather Morris


What's on your nightstand? (Strictly speaking of books; I don't care what else is there).