There is nothing quite so decadent as taking a couple days off work with no plans. When you're young, fresh out of school and don't have much vacation time, you have to save those precious days for friends' weddings or family gatherings or a fake doctor's appointment so you can leave early to go to The Who concert in Cleveland (hypothetically speaking, of course). But when you're in your 40's and have worked at the same company for 15 years, you can afford the luxury of a selfish day off. I took two, and they were wonderful.

Thursday we refinanced our house, which cuts our monthly mortgage payment by a third. Aaron and I went out for a rare weekday lunch together. I had a lovely afternoon nap and we went to Buffalo Wild Wings for our traditional Thursday night pre-choir rehearsal wings and beer.

Friday I had a chiropractor appointment and went to the gym. We were supposed to go to the movies but Aaron got stuck working so I took a nap. That evening, we got together with three other couples for a beer tasting and Mexican feast. The beer tasting was hilarious - three people chose Natty Light as their favorite, two chose Genesee Cream Ale, I chose PBR and other "faves" were Busch and Budweiser. It was also pretty cool that the common thread with all of these people was their friendship with Aaron and me. I love bringing friends together.

Saturday we walked to the movies to see A Good Day to Die Hard. This necessitated walking through the Arena District and this weekend was The Arnold Sports Festival, so there was some good people watching. Aaron remarked that someone's a damn good salesman to convince so many people to come to Columbus in March. The movie was entertaining. I can't help it, I love John McClane. Afterward we hit the R Bar for a yard of beer and sandwiches. 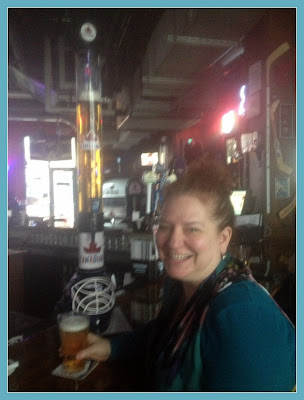 
Sunday we did the church thing. Aaron had to go to a customer's house so I ran by the grocery store and saw this, which I consider cruel and unusual punishment when it's 23 degrees:


Then I took yet another nap and made dinner and we watched some DVRed shows.

Linking up with Sami for Weekend Shenanigans (which I always think of as Jan-anigans because my friend Jan does things like I do in inserting my name into things like Gwensday, and come to think of it, I could make it Gwen-anigans and now I'm just babbling).