Note: I've updated the "Restaurant Odyssey" page so if you've missed any previous posts or just want to relive some of our adventures, click above.


Rigsby's is something of an institution in the Short North. It's been around for over 20 years and is often considered a "go-to" restaurant for a special occasion. A couple years ago, Aaron and I chose to dine there for our joint birthday dinner. Kent Rigsby and his wife Tasi own this restaurant as well as Tasi Cafe, which was stop #9 on our tour.

On a Saturday night we went to Rigsby's with our friends Pete and Val. We've been friends with them since shortly after we were married (that's a long damn time, if you're keeping track) and we don't see them as often as we'd like, but we always have a good time.

Our expectations were somewhat high, and that's not usually a good thing. Sure enough, we had a less than awesome experience, mainly service-related. While our server was nice, our first impression wasn't great when she confused two of the before-dinner drinks (and she was writing them down).

We started with the Salumi Tasting, which was okay but basically a plate of sliced meat and nothing special. 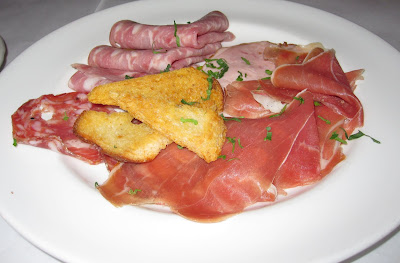 Aaron was the only one who ordered a salad and he got the Roasted Root Vegetable Salad. He said it was pretty good, but he didn't get to finish it because our entrees arrived before he was done. Not impressive. 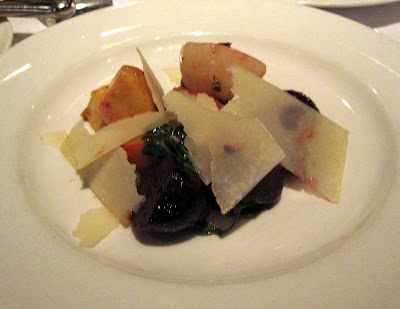 For our entrees (clockwise from top left): I had the Gorgonzola Pizza with fingerling potatoes; Val had the Prosciutto Pizza with (a lot of) arugula; Aaron had the Orrechiette with housemade sausage; and Pete had the Penne Carbonara. The food was all good, but not great. I don't think any of us finished our meals. I can only speak for my pizza, which I felt had uneven flavor and could have benefited from a bit more gorgonzola. 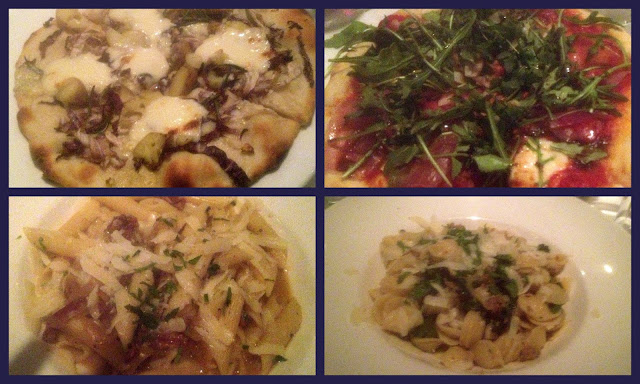 We had ordered a bottle of wine with dinner and as soon as the server brought it we told her we wanted another bottle. We also asked for more bread, which never came. And we waited and waited for the second bottle of wine but finally just cancelled it, paid the bill, and went up the street to the Local Bar for after dinner drinks.

It was a disappointing outing, especially because we had brought friends. Granted, it was a busy Saturday night, but we had arrived at 6:30, well before the crowd, and our server seemed overwhelmed. Rigsby's has a nice bar area for happy hour or late night drinks, but of the two Rigsby-owned restaurants on our tour, we preferred Tasi.

Spidey and the Gila