It's a bonus "best of" edition of Steph and Jana's Show Us Your Books, in which we highlight our favorite books of 2015. Note that these are books I read in 2015, but that's not necessarily when they were published.


I thought about listing these in some sort of order, but they don't deserve to be ranked; they're all so different. So, in no particular order:


You by Caroline Kepnes - This book is crazy. It takes the reader inside the mind of a stalker/serial killer and somehow makes him likable. (My blog post about this book was in August.)


Saving Francesca by Melina Marchetta - A YA novel that is truly a coming-of-age book. I loved the characters and the story. There's a follow up book (focusing on one of the other characters five years later) and I'm planning to read that one in 2016. (Also August)


Big Little Lies by Liane Moriarty - 2015 was the year I finally read Liane Moriarty and I read three of her books. I enjoyed all of them, but if I have to choose, this is my favorite. Moriarty does a great job of weaving different stories together and I like to call her books "chick lit with a purpose." (November)


The Girl on the Train by Paula Hawkins - This seemed to be the "It" book in early 2015 and in my opinion, it lived up to the hype. The characters are unlikable but I didn't even care. This really kept me guessing and on the edge of my seat. (May)


The Martian by Andy Weir - This book made the list because I resisted it for months, thinking there was no way I'd like it, and then I was proven wrong. There's a lot of math and science that went right over my head but it didn't even matter. The story itself was gripping and the narrator was sarcastic and funny. (October)


Leaving Time by Jodi Picoult - I've always been a fan of Picoult. Many people talk about how formulaic her books are and that's somewhat true, but it's never turned me off. But this one is a bit different and had a twist that I wasn't prepared for. This book came to me at just the right time and while I know I said I didn't want to rank them, this would probably be my personal number one book of 2015. (June)


Are any of your favorites on this list? What books did you love this year? 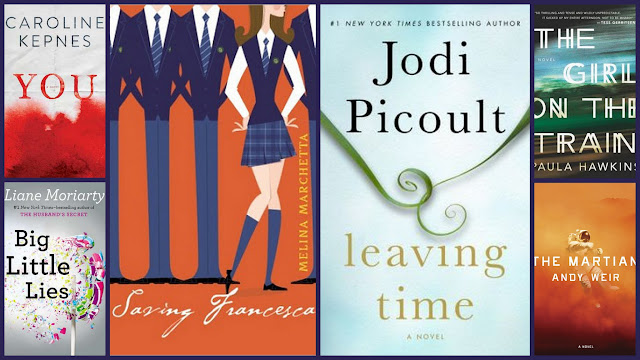 HA! Today I made sure that Steph also did Thursday Thoughts before posting my own.

This week in cat antics: If you follow me on Instagram, you saw this picture from last night 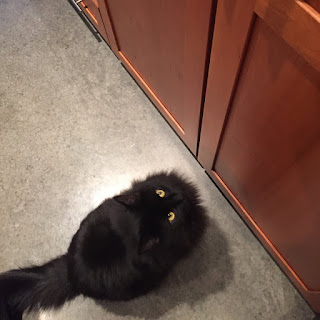 "But Mommm, if you're in the kitchen
that can only mean it's time for ME to eat!" #idontcookoften

(That cupboard is where the food is kept.)

Then he recruited reinforcements: 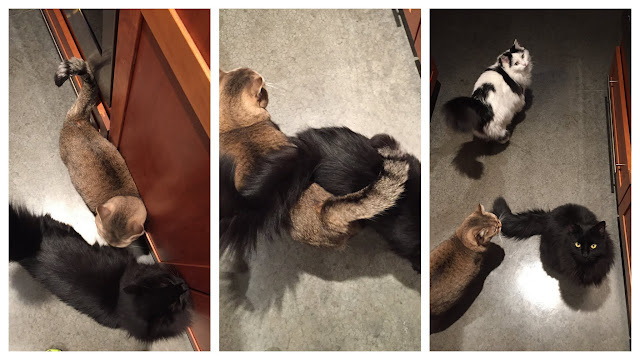 Speaking of pets, did you hear about the first litter of in-vitro puppies born at Cornell University? I was baffled by this until I read that it's not about puppies; it's about potentially saving other animal species. Still, if Michael Crichton were alive, he could write some scary book about it a la Jurassic Park.

Last Sunday at church, our children's choirs presented their annual Christmas musical. Every year I intend to go and don't, but this year I dragged my lazy self out of the house, and I'm so glad I did! The director of children's music, Sally Beske, writes the words and music and this is the 20th year of these original productions. The theme was finding peace, and the lesson was that we all need to allow ourselves time to rest and to play, in order to make peaceful decisions. I can think of quite a few people who could stand to learn that lesson. We all received permission slips with an affirmation on the opposite side (written by the children). This may have been the best Christmas gift! I don't know that video will do it justice, but you can watch it here.

I’m refraining from talking politics (at least for today) because I'm trying to keep this post happy, but I do love this meme: 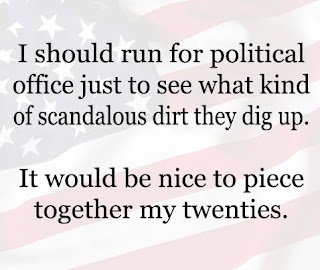 Email ThisBlogThis!Share to TwitterShare to FacebookShare to Pinterest
Labels: random

A Trio of Books

I contemplated skipping this month's book post as I only have three books to talk about, but (obviously) I decided to go ahead and do it. Plus, I'm likely to forget these if I wait another month and I certainly won't be writing blog posts ahead of time!

This month Steph and Jana are giving away a $25 Amazon gift card and a $25 donation to Project Night Night, which provides homeless children with a security blanket, a book and a stuffed animal. I'd not heard of this organization, but I absolutely love this idea.


On to the books:


Burning Down George Orwell's House by Andrew Ervin - I read this for my real-life book club. It's about a guy from Chicago who is burnt out on life and work and decides to go off the grid so he travels to Scotland and rents the house in which George Orwell wrote 1984 (this guy is obsessed with 1984).  The book itself was good, but I don't know how great it was for a book club read. There wasn't a lot to talk about. My friend Lisa and I usually walk to book club together and talk nonstop about the books before we even get there, and this time neither of us said anything about it. But it was still entertaining and I gave it 3 stars.


The Truth About Him by Molly O'Keefe - This is the sequel to Everything I Left Unsaid, which I talked about last month. I downloaded this book almost as soon as it was released because of the cliffhanger in the first book. I'm still giving this one 3 stars, but it was kind of all over the place. I couldn't really get on board with the "dangerous situation" this time around.  Still lots of steamy sex, and also more of the standard "he/she deserves better than me," which gets pretty annoying. But Annie and Dylan's story finishes up, and apparently there's going to be a third book which focuses on a couple of minor characters whom we met in the first two books.


The Husband's Secret by Liane Moriarty (audiobook) - This one gets 4 stars. I listened to the majority of this while driving back and forth to Pennsylvania around Thanksgiving. The road trips themselves didn't get me through the whole book, so I was listening to bits and pieces until last Friday when I couldn't stop listening until it was over. It's not hard to figure out the "secret," and it's revealed fairly early on, so there are parts in the middle that didn't seem necessary, but the ending was quite unexpected. I very much enjoyed the reader; she did a good job of varying her voice for the characters.