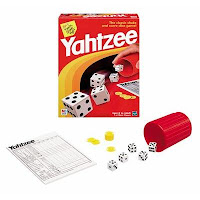 A little more than five years ago, Aaron and I moved into our dream house, which was built from scratch. It was a long, looooong process but well worth the wait. We lived there for about a year before meeting any of our neighbors. Now, it's hard to imagine our lives without the people of the BBITIV (Best Block in the Italian Village).

We first got to know Colin & Amy, who live four houses away from us. Most everyone has their introduction to the 'hood through Colin & Amy; we call them the Chamber of Commerce. They invited us to their legendary Halloween party and we met some more neighbors, although afterward we didn't recognize most of them since they were no longer in costume. 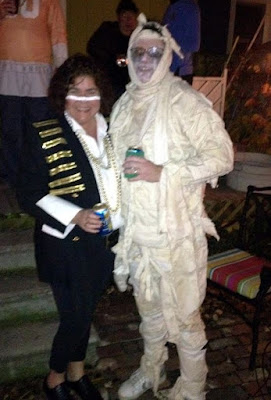 It was decided that we should have a Christmas party so we could get to know more neighbors. So Amy drew a map for us and Aaron printed up a flyer and we also invited friends we already had so we knew people would show up. The flyer had things like this on it:


(So you know that house on the corner where it looks like someone might live there but you aren't really sure because it is always dark and the yard doesn't look so great and maybe they live there but just want to keep to themselves but you watched the house go up and it looks pretty cool and you wonder whether or not the people inside are cool or just assholes but then you heard from Amy that they voted for Obama so they can't be all bad, can they? Well, here's a chance to find out for yourself ... )

beverages courtesy of the Columbus Brewing Company, because Gwen works with them
and the brewmaster who is a cool guy will be at the party too.

It worked, because we had a great turn out and that night in our garage Angie had the idea of having a monthly gathering of the girls to play Yahtzee (she figured the ladies in the 'burbs do Bunco, so we'd go old school). We started this tradition in January of 2009 and we've done it every month since. We rotate houses, so you only have to host once a year, but you provide all the food and drinks when you host. Now, as you might imagine, the actual playing of Yahtzee didn't last. Angie used to bring the game every month and for a while we did play at least one game, but now we don't even pretend. It's just a way for us to get together regularly, but we still call it Yahtzee night, which is tonight.

Sometimes it's a late night, sometimes not, and sometimes a fun Yahtzee night can lead to the Yahtzee flu the next day. Let's hope that's not the case this time around!

Oddly enough, there aren't many pictures that exist of past Yahtzee nights, but here are some from June of 2009 when we got rained out at Sara's house and had to move the party to Jennifer's where we had a dance party in memory of Michael Jackson, because it just happened to be the day he died. 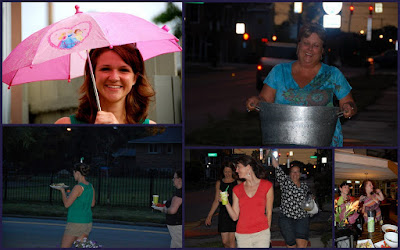 Besides Yahtzee and the Christmas party, we have new traditions like the Chili Cook Off in February, Crawl for Cancer in May, Comfest brunch in June and the Garden Party in September. We've had a few weddings, a baby, vacations and some not-so-fun occasions. These truly are the best neighbors ever!

Linking up with Shanna for Random Wednesday