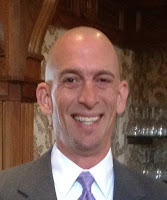 If you're a new follower, check out the advent of our Restaurant Odyssey here.


Hi all - guest blogger Spidey here.  I thought it was important to let all of the Gila's followers that I'm not just a pretty face that hangs out with the best girl ever, so it's my turn to review.

A few Sundays ago we made our trek to the Short North Tavern.  No doubt I was looking forward to this stop, as I consider the SNT to be a benchmark of the area.  Few would disagree with me that this is an institution of the Short North, an establishment here long before our home was in the "cool, trendy" part of town that it has become.  I can remember being here years ago when the area was forgettable - bordering on scary - and we've since spent many a day or night here.  I don't know how long the SNT has been in business, but it has been long enough that it commands the respect of the neighborhood, a place against which other are compared.
The SNT (I don't know of anyone who just calls it "the Tavern" or some other drivel ... it's always the Short North Tavern) is in many ways exactly what you would expect: dark, kinda dingy, and perhaps imposing if you are a newbie.  The decor is Classic American Dive Bar: long bar with several beers on tap, liquor on the back mirrored wall, peanuts on the counter, a couple of TVs, kinda loud music played from the CD changer (although the tape deck is still there), 2 dart boards, small bathrooms in the back, and that smell that, while not unpleasant, says "I've been here longer than you, and I'm probably going to outlive you too."  However, they also have some cool items that I particularly enjoy - a large wall that rotates the work of local artists, and no less than 40 OLD analog AM radio's - the kind that I imagine my grandparents purchased when they were younger than I am today.  Antiques for certain, I love them.
Until recently, the SNT wasn't a place for fine dining.  Unimaginative "bar food" was served merely as a public service.  Two years ago if you told me they had the best wings in Columbus I knew your experience was influenced by too many beers.  But, perhaps given the competition in the 'hood, they stepped up their game recently and hired a chef.  I'll never forget the time when Gwen and I sat down and the waitress handed our menus but also said "here are our specials for the night."  Hunh, what?  Specials?  And damn, they were good. It's still not "fine dining," but it's impressive bar food. 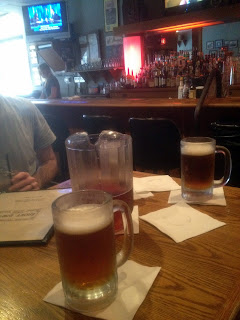 So on this Sunday we had some anticipation of good food as well as cold beers, and we were not disappointed.  We were joined on this occasion with our good friends Chris and Katie (we sing with Chris at the symphony and they live in the Short North as well.)  Chris had an Angus burger with blue cheese, grilled onions and mushrooms and a side of sweet potato fries; Gwen had the special - a shaved Prime Rib sandwich and for-real fries; and Katie had the fish and chips: catfish lightly breaded in a cornmeal batter that is both light and substantial, keeping the fish tender. All looked fantastic and apparently tasted great as all plates were cleaned, and none were on the menu two years ago (yeah, there were burgers, but not like this).  Me?  I went old school with the Beef Nachos Grande which are as you would expect, save for the homemade salsa, not that canned crap. The nachos are greasy goodness, and when Chris had a few I asked him "Don't you feel kinda glossy?"  To wash this feast down were "a few" pitchers of Yeungling with frosted glass mugs.  We watched the OSU men's cagers beat Michigan (always a treat regardless of sport), caught up on life, and had a fine time. 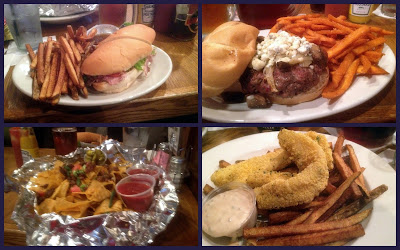 There really isn't anything too unique about the SNT - I'm certain every decent sized town in America has the same place.  If you say you've been here and I know you haven't, I won't argue because in reality you probably have.  But this one happens to be in my town, and I absolutely love it.

(Editor's note: SNT is so old school it doesn't have a website and I can't find a menu online, so I may have to sneak back in to take a picture of the menu.)

Stay tuned for our next stop, breakfast at Tasi.