On January 20, 2003, Aaron drove his brand new Mini Cooper S off the lot. The process of him buying this car began ten months prior when he saw a billboard that simply said "Goliath Lost." He was hooked. He got on a waiting list at the Cincinnati dealership and ordered his dream car. Once it was in production, he could track its progress online and he knew exactly when it was put on a ship to come to America. 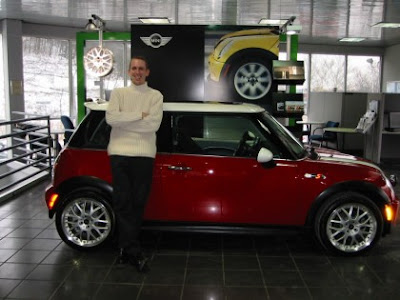 Aaron named his car the SCARGO (like "escargot") and he made a CD to commemorate the occasion. Here are the liner notes he wrote.

The Beatles - Baby You Can Drive My Car
Selfishly I'd like to think this song was inspired by an original Cooper. The most obvious cut on the disc.

Chumbawamba - Tubthumping
These hooligans grew up listening to the Beatles?

Thomas Dolby - Airhead
My thanks go to Robert and Taco for this one. If you can listen to this without bobbing your head, you're not human.

The Rolling Stones - Miss You
Originally I selected "Under My Thumb" for this must-have group. My affinity for funk prevailed.

The Police - Every Little Thing She Does Is Magic
Every time I hear this I smile a big stupid grin, knowing that some of my friends are of the life-long variety.

Led Zeppelin - Rock and Roll
Screw Cadillac. This is too good a song.

Ozzy Osbourne - Crazy Train
I fear my 9 year old niece will grow up thinking this guy is a TV star. Jacqueline, he eats live bats.

Bananarama - Venus
The Spice Girls get nothing on these three. Pure sass.

The Cure - Let's Go To Bed
Summers during college I worked as a short order cook - awake at 4:30a, at the grill by 5:00a. Elmer, a '74 Super Beetle, was my alarm clock, blasting this tune. That was some good motoring.

ELO - Turn To Stone
I know a 20 year old who has all 57 ELO albums. His vision was brought to my attention on a road trip to Windsor.

Daniel Bedingfield - Gotta Get Through This
Ken has a great understanding of music as it relates to a mood. Perfect.

The Clash - Rock the Casbah
Although historically inaccurate, this to me signals the genesis of the Brit-pop invasion.

The Who - Going Mobile
Sorry to beat you over the head with the obvious.

Judas Priest - You've Got Another Thing Coming
JP and I go way back. Yeah, right.

The Power Station - Some Like It Hot
Of all the bands on this disc, this is the only one I have seen in concert. Note to self: get out more.

The Prodigy - Slap My Bitch Up
A bit of deviant pleasure for a self-admitted sexist. I think it nicely balances the Lutheran church choir director/Sunday school teacher in me.


Most of the names listed are former co-workers of his. Aaron's no longer a church choir director or Sunday school teacher, although we do sing in a church choir. And I like to believe that he's not (as much of) a sexist anymore. The picture above is the CD cover. He got the girls at the dealership to sign the disc. He gave out CDs to friends and family. He also added this on the back cover:


"Mini is all about a state of mind - they call it motoring. While I am certain they want you to motor in a Mini, I believe you can get lost and enjoy life any way you choose, regardless of the road you take or the vehicle you drive to get there. I do hope that, from time to time, this CD accompanies you on your journey."


Linking up with Shanna for Random Wednesday