We don't eat a lot of Greek food. It may stem from an unfortunate experience I had at a Greek restaurant the first time I met Aaron's parents. Not unfortunate in the "I vomited all over the table" kind of way, but as I recall I was trying to be an adventurous 19-year-old whose palate was not terribly developed so I ordered moussaka. And I hated it. But there I was with my boyfriend's parents and their friends and I didn't want to appear picky or ... I don't know what. So I forced myself to eat it until one of them took pity on me, because clearly I wasn't doing a good job of acting as though I liked it.

I hadn't thought of that in years. It's funny the memories that food conjures.

A couple Saturdays ago we went to The Happy Greek. I think we've only been there once before, and it was so long ago that Aaron didn't remember ever being there at all. The main entrance has some tables and a bar area; we were seated in the next room which is two levels and very colorful.


Shockingly, neither of us ordered drinks (yet) but we started off with the Falafel appetizer, which we both wanted so there was no debate. We were really hungry so they we made quick work of them, and regardless of our hunger level, they were quite tasty. You know what I mean, right? There are times when you're so hungry you could eat cardboard and declare it the best thing ever. This was far from cardboard.


For dinner, I ordered the Spicy Parthenon Scallops (you'll find that I order scallops a lot) and Aaron had the Spicy Gyro with fries. Mine was delicious - garlicky in a spicy lemon sauce with veggies. For my two sides I ordered the Oven-roasted Lemon Potatoes, which looked like half a potato and I thought the "lemon" would turn me off but it was rather good, and the Mediterranean Vegetable Medley. If I had known that those vegetables were the same as what was with the scallops, I would have ordered a different side because while there was nothing wrong with the vegetables, the spicier version was much more flavorful and left the side dish feeling bland. 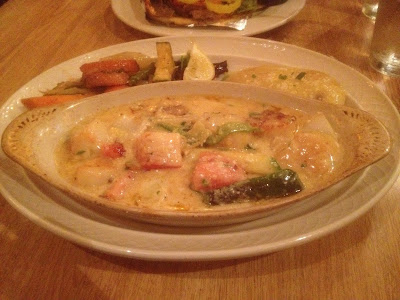 Aaron thoroughly enjoyed his Spicy Gyro and said he'd get it again. He also said that he wished we didn't have to wait until we're done with the tour to come back again (take note of that; it won't be the last time you read it). 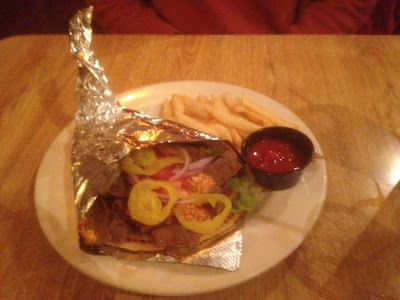 When we ordered our entrees, I ordered a glass of wine (Sauvignon Blanc) and Aaron ordered a beer (CBC IPA). The server forgot about them so when we ordered dessert I reminded him. To be fair, it appeared that he was the only server in the room and he didn't make excuses, but was sincerely apologetic. For dessert I ordered Pistachio Baklava, and allowed Aaron to have a couple bites. This, for me, was the highlight. I do love baklava and this was warm and gooey and ... divine. 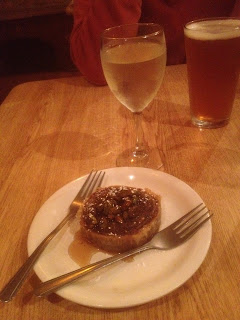 As I'm obviously no expert on Greek food, I can't speak to its authenticity, but we both enjoyed this meal and would go back.