Last week I made reference to picking games against the spread (and last year I did a post about it here). I had some readers -- OK, one reader -- ask about how that works. 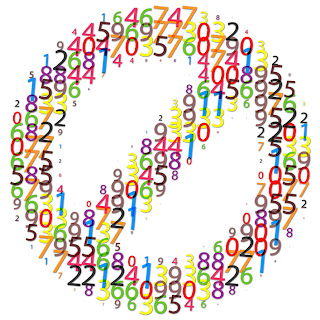 **UPDATE: Now that I've typed all this out, I don't know that anyone will really "understand point spreads" after reading it. But read it anyway, pretty please!


First you need to find out what the spreads are for all the games (the spread is also called the line). You can Google "nfl spreads" and you'll find a lot. For our purposes, I'm using ESPN. 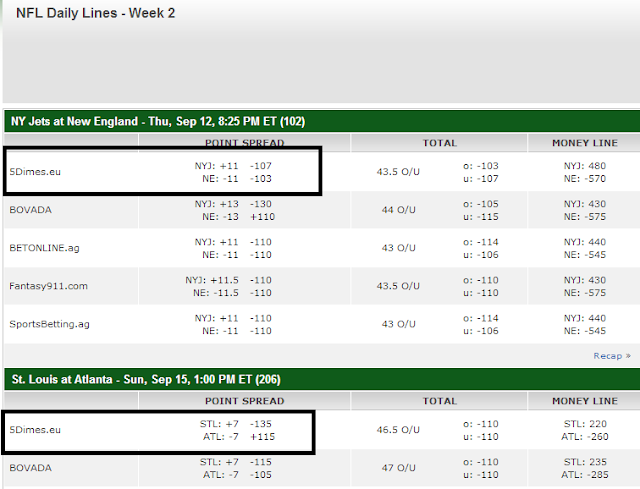 There are about five different sources, but they're fairly close. I'd say just make sure to use the same source on each game. Remember: THIS IS ALL JUST FOR FUN. So I've drawn around 5Dimes.eu because that's the one I'm going to use.

So for last night's New England vs. NY Jets game, the line/spread was 11. You see that next to NYJ is +11 and next to NE is -11. That means New England was favored by 11 points. Another way to look at it is that the oddsmakers are saying New England will beat the Jets by at least 11 points.

When Aaron and I picked the game, he picked New England and I picked the Jets because an 11 point spread is pretty big, and it turns out I was right. While New England won, the score was only 13-10. They only won by 3 points, not 11, so I won the game. Another way to look at that (and to freak out my math-challenged friends) is that in our world, the final score was 13-21 in favor of the Jets. Or minus-2 - 10.

The next game shown above is Atlanta vs. St. Louis, and they're putting the line at 7 points, so if I pick Atlanta, they need to win by at least 7. Note that the lines change during the week. All that matters is the spread when you make your pick.

Last week for the first week of the season, here's how Aaron and I fared: 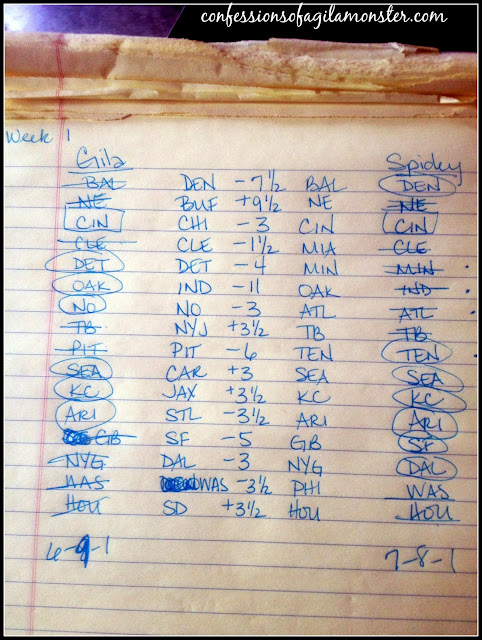 Not great, although since I won last night's game, we're currently even. And we already have a tie! Chicago was favored by 3 over Cincinnati and they actually won by 3, so it didn't matter who we picked.

I'll stress again: THIS IS ALL JUST FOR FUN.

I will not recommend or endorse gambling because bad things can happen, like your roommate who is a gambling addict doesn't pay the rent and gets you evicted. **This didn't happen to me but to someone very close to me who shall remain nameless.

On the other hand, you're all adults so you do what you want. But I know nothing.