Today I'm linking up for the first time with Lindsey for Friday Favorites. Lindsey is also in one of my Fantasy Football leagues, which leads me to one of my Friday Faves for this week: football season!

I'm in three fantasy leagues this year, which may be nuts. One is with Aaron and his high school friends and their wives. I've been in that league since 2007, when I finished dead last (but I redeemed myself by winning the next year). The other two are blogger leagues; one is a traditional head-to-head, the other is a floating salary cap league, which I still don't totally get so that could be interesting.

In case you live in a cave, or just don't care about football (WHAT?!), last night was the NFL season opener. Denver crushed Baltimore, and Peyton Manning lit it up with 7 touchdown passes. And I have Peyton in one of my leagues. 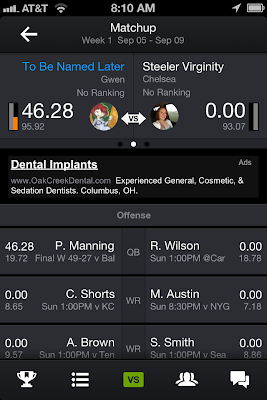 Just to be clear, 46 points is HUGE for one player.

Unfortunately, I did not pick the Broncos to cover the spread in Aaron's and my own little contest (read more about that here).

College football is my number-one-with-a-bullet favorite sport (Aaron's, too). Last week we went to the Ohio State game, and I even painted my nails scarlet and grey. I think today I'll paint them blue and white. Last Saturday was a much better first day of college season than last year's was, for me personally. 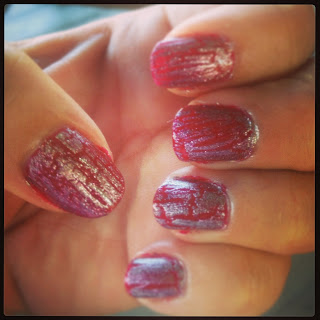 Even though I love football season, I'm still quite invested in baseball. The Pirates are leading their division, and this week they reached the 81-win mark, which guarantees that they will not have a losing season, breaking a 20-year streak. This weekend they have a big series against St. Louis. Go Bucs!

Also making my favorites list this week: the weather (it's been absolutely fabulous); the first church choir rehearsal last night; and of course, my new job!

Have a fun, fantastic weekend and enjoy this blast from the past in honor of fantasy football!