Last night we went to the Bengals/Steelers game in Cincinnati. It was a late night, though we stayed with friends there and drove home this morning. Here are some scenes from before and during the game: 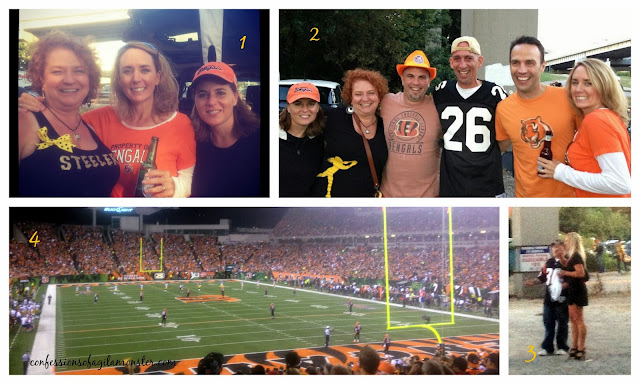 1 - Tailgating!
2 - Aaron and two of his best friends, Mike and Mike - and hey! you might recognize them from last week - and their wives Amy and Tracy (and yes, I made a costume change)
3 - I don't know how well you can see that girl's outfit but yes, she's wearing a short skirt and high heels. To go to a football game. (At least they're wedges and not stilettos...)
4 - Proof that we really were at the game. The Steelers lost, but we had a great time!


I also got a glimpse of my blog friend, Erin, who was working at the game but ran up to say hi. We didn't get to talk or take a picture, but it really did happen!

8:00 ET - Dads, a new show from Seth MacFarlane (of Family Guy and American Dad, only this one's not animated). Seth Green and Giovanni Ribisi star as dudes whose fathers (Martin Mull and Peter Riegert) move in with them. Apparently they're going for an All in the Family vibe here, but I wonder if Carroll O'Connor might be rolling in his grave.

8:30 - Brooklyn Nine-Nine, stars Andy Samberg in a cop show that's actually a comedy (Barney Miller, anyone?). This looks funny and I'll be watching, especially because it also stars Andre Braugher, and I can't WAIT to see him in this comedic role as a police captain who also happens to be gay.

9:30 - The Mindy Project is back. Both of these are shows that I started out watching but they just didn't stick with me as must-sees.