In general, I'm a girly girl. I love clothes and jewelry and makeup and hair products and SHOES. Shopping is like an addiction for me. I'm not really into getting dirty or doing manual labor. However, I'm a big fan of violent movies, I hate the color pink, and I love football. During football season, I can usually be found watching college games all day Saturday, and on Sunday I'm either at home or at a bar watching the Steelers. Aaron could not be happier about this; in fact, it might be why he married me.

Aaron and I have only one team in common, the Pittsburgh Steelers. In college football, he's all about Ohio State, but I refuse to give up my loyalty to Penn State, even though I live in Buckeye country. We generally cheer for each other's teams except when they play head-to-head. On those days we used to purposely go out to watch the game so we'd be less likely to have to call 911. Several years ago, Aaron had this flag made: 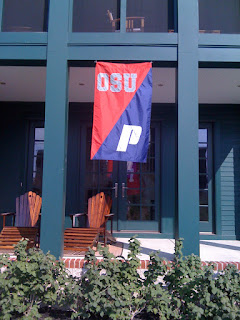 Now, we'll watch just about any college football game, no matter who is playing. With the NFL, we used to not pay much attention to other teams, but we managed to make things a little more interesting. Back in the day, before the internet took over our lives, we used to pick all the NFL games against the spread. One of us would write down the matchups and the point spreads from the newspaper, make our picks, then read out loud to the other person so he/she could pick the games. And we always start this process by saying, "home team first."

Over the years we drifted away from this tradition. First, we got involved in picking games online with friends, and later we started playing Fantasy Football (we're in two leagues this year). But we always had fun with our own little contest so last week Aaron suggested we start it up again. We missed week one, but that's OK. And so on Sunday, while we were out for brunch, I got an envelope out of my purse and wrote everything down, getting the spreads from my iPhone (which is my excuse for why one of the games is missing from the list entirely), and then I said those three magical words.... "home team first." 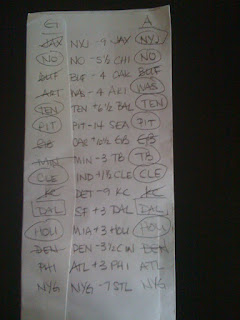 For the record, we only picked four games differently, and Aaron beat me in all four. But have no fear, I'll bounce back!
Posted by Gwen at 4:02 PM