So what's the weather like where you are? On Gwensday Columbus got up into the 60s and we even spent some time on the screened porch after dinner to take advantage of the mild temps. Yesterday it just got colder and colder and today all the schools are closed because the white veil of death is coming. Leading up to today, the local news gave teasers like "we could have record snowfall!" As it turns out, the previous record was 2 (that's TWO) inches. Inches, not feet. 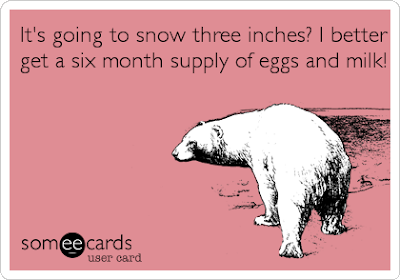 To be fair, the inclement weather is starting out with ice, and that does make everything worse.

Let's move on to "The Sound of Music Live," which was on NBC last night. I debated whether or not to watch this and I wasn't going to be home anyway but since I have a DVR with seemingly unlimited capacity, I went ahead and recorded it and watched later. I wasn't sure I'd make it through the whole thing because honestly, Carrie Underwood was just ... not good. And I'm not hatin' on her (even though I really wanted Bo Bice to win "American Idol" that year because she had zero stage presence, I admit that she's turned into quite the performer, just not in this). Sorry, but girlfriend can't act.

The best parts of the show involved seasoned Broadway actors Laura Benanti, Christian Borle and Audra McDonald (I never liked "Climb Ev'ry Mountain" until she sang it - I've mentioned my love for Audra before). And this is the point: NBC wasn't doing a remake of the 1965 movie; it was a live televised performance of the 1959 stage musical. It really drove me nuts to read people on Facebook and Twitter complain that "nothing can compare to the original...Julie Andrews was the best." Look, I agree that Julie Andrews rocks, but unless you saw Mary Martin on Broadway in 1959 you can't talk about the original.


I've been a Maroon 5 fan for a long time; I've seen them in concert. But I was late to the Adam Levine party until I started watching The Voice. He's yummy and seemingly very cool and fun. And he's admittedly messy. I just watched him on Ellen and he talked about the difference between dirty ("dirty is gross...unhygenic") and messy ("messy is when you don't care that that shirt is on the floor"). I love him even more now.

Finally, on a less frivolous note, when I heard that Nelson Mandela died -- which, by the way, I found out from an ESPN alert on my phone -- I knew that Facebook and Twitter would blow up with quotes and sentiments and I can't really add to any of that, but here's one of my personal favorite quotes. 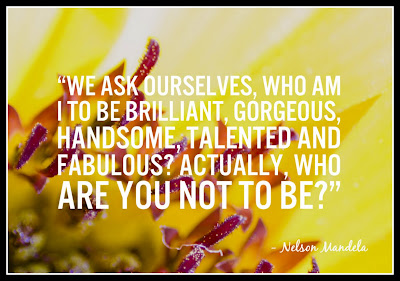