On Gwensday I do what I want...

...well, to a certain extent. Anyway, I wanted to be sure to share with you some events from last weekend.

Friday we went to Mike & Amy's new house for a champagne toast. Aaron and Mike have been friends since they were 12 and Mike and Amy are moving here from Atlanta. They'll be living a 10 minute walk away from us and we're excited to have them here! Of course, Friday was when we got hit with snow and ice -- welcome to Columbus!


Then Aaron and I went to Mitchell's Steakhouse, which used to be a Cameron Mitchell restaurant but is now owned by Ruth's Chris but is still called Mitchell's. Go figure. Anyway, it's one of our favorite places to go during the holidays, especially when it's snowing (although they should have opened up the blinds so patrons could see the snow outside). We both ordered steak, of course, and other highlights were my lobster bisque and a coconut ginger lemon drop martini - delish!


THEN, we walked over to the Ohio Theatre to see the Columbus Symphony Orchestra and Chorus perform the Holiday Pops. This was the 30th anniversary of the Pops, and the first time in 22 years that Aaron and I were in the audience instead of onstage. We thoroughly enjoyed it and had to refrain from singing along, except when we were supposed to sing along!

Sunday we went to The Grand Valley Dale Ballroom with some of our framily to see Deana Martin's Christmas show. Deana is Dean Martin's daughter, and Valley Dale has been host to lots of stars, including Dean, Frank Sinatra, Bing Crosby, BB King and even Alice Cooper! It was a fun, festive evening! 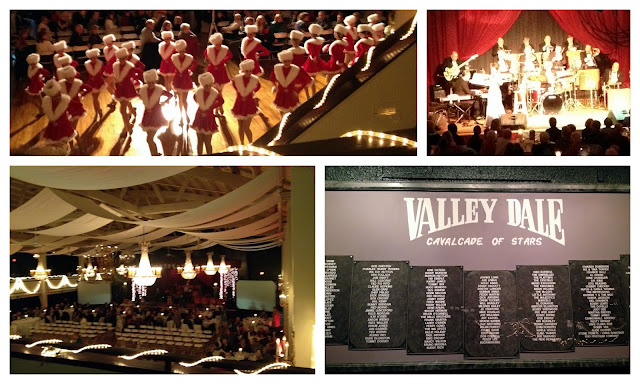 As for Saturday, it was a pretty lazy day involving naps and football-watching. And now it's already Gwensday and getting close to another weekend. Hooray!