So, how did I get here? Growing up, I was very thin without even trying. I was warned that it would catch up with me, but why on earth would I do anything about it (and what would I even do, until it's too late)? Even in college I stayed pretty thin. I've never been an athlete, but I guess traipsing around campus from class to class provides exercise. How about that?!


After graduation, I settled into a desk job and ever-so-slowly started putting on a little weight. Then I married someone who is ridiculously thin and even 20+ years later shows no signs of ever NOT being thin. He could eat whatever he wanted whenever he wanted, so why couldn't I?

I love clothes and I love to shop. I became irritated when the sizes got bigger. I tried different weight loss plans - the Zone Diet, Slimfast, Weight Watchers, Eat Clean... I participated in a "biggest loser" type class at my gym, and actually saw success. But something would happen: illness, surgery, death in the family, and I'd get off track and not get back on.

Over a year ago, I ordered a T-shirt online. I'm certain that I ordered an extra large, but I received a size XXL. I was disappointed, but I was pretty much mortified when I tried it on and it wasn't too big. Granted, sizes are all different and I don't wear XXL in everything, but still...

My trouble area is my stomach. This apparently gives some people the idea that I'm pregnant. I've actually been asked by complete strangers "when are you due?" And please note that it's always been women, not men, who ask the question. Seriously? Why do people DO that? And of course, I'm usually so thrown off that all I can say is "oh, I'm not pregnant." But what I'd often LIKE to say is: 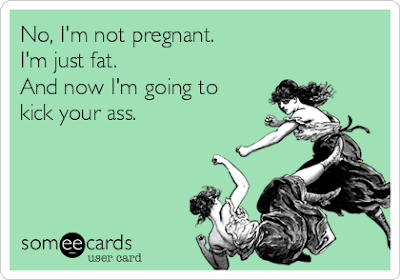 I don't have any wise words for this month's post. I guess I'm just venting. Since last month, I have lost a few more pounds, and I did buy a new charm for my bracelet. But I'm not putting it on until I get to a certain point and I'm super close but not quite there yet. 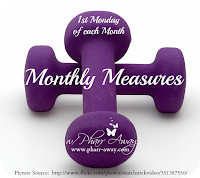