The Day After Yahtzee

So last night was my turn to host Yahtzee (see my post explaining this monthly gathering here). Now, in case I haven't mentioned it before and if you're new around these parts, I am NOT the cook in my household. Fortunately I married a guy who loves to cook and is good at it so I'm off the hook most of the time. When I host Yahtzee I usually have an array of cheese and crackers, taco dip, and a go-to dessert that is super easy. For this month's venture I decided to step outside my comfort zone and make a bunch of (still easy) food that I had never made before.


My drinks of choice were boxed wine, Miller Light for Amy and a sangria slush (which didn't go over that well and why should it, since it's February and it's flipping cold outside).


I made items that I either saw on Pinterest, or found elsewhere but they're now all pinned to my board. I made a black bean hummus (my first attempt at hummus and it won't be my last - delicious), broccoli cheese bites (in which my broccoli wasn't chopped small enough but they were still tasty), a warm blue cheese and bacon dip (described as "crack in a bowl;" I strongly recommend doubling or tripling this recipe), pizza quesadillas (which I didn't execute super well but I'd try them again) and double delicious bars. 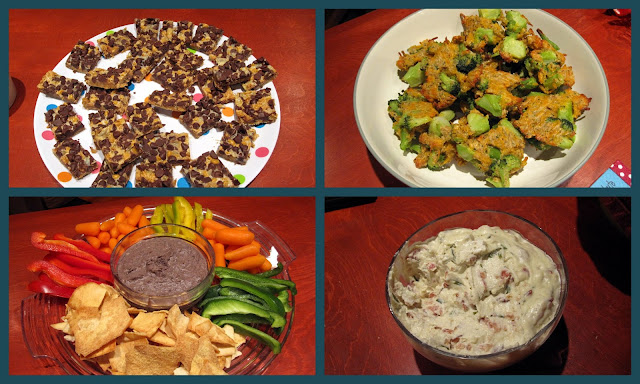 I made the hummus Tuesday night and the double delicious bars Gwensday morning before work. Funny story: when I bought stuff for Yahtzee I did not get chocolate chips because I was certain that we had at least a bag and a half. But sure enough, after I'd crushed graham crackers and I had butter melting, I realized that there wasn't a chocolate chip to be found in the pantry. I also needed some cheap red wine for the sangria slush. So off I went to Kroger at 7:15 am looking like hell because I hadn't showered yet to get two bags of chocolate chips and a big bottle of Gato Negro Merlot. Luckily I live in a 'hood in which that probably wasn't unusual, although the cashier did give me a bit of a once over. Don't judge me.

As always, it was a fun night of laughter and catching up. I took a preemptive tactic against the Yahtzee flu by scheduling today off, and then I just decided to take Friday off as well. You can reach me on the couch in front of the fire catching up on Pretty Little Liars and whatever else I can fit in.