And the Oscar goes to...

Let me be clear: I know that it's nuts to judge movies and actors and directors and to try to determine that one is better than another when they're all so different. But I love the Oscars. I have no interest in going to an Oscar party, or hosting an Oscar party. I watch them at home and I'm very serious about it. Every year I make an effort to see all of the Best Picture nominees, although the last time I managed that was for the 2007 awards (presented in 2008) when No Country for Old Men won, and really the only reason I got them all in was because I went to AMC Theatres Best Picture Showcase, in which they showed all the nominated films in one day. Now that there can be up to 10 nominated films, they still do the showcase but  it's split over two Saturdays and in the immortal words of Sweet Brown, "ain't nobody got time for that."

Two years ago, I made a valiant effort and saw eight of the ten films. This year I saw seven of the nine nominees. Aaron plays along and tries to see most of them with me, but he's also usually asleep well before the Best Picture is announced, so he's clearly not as devoted as I am. 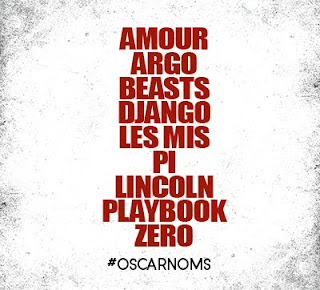 Amour - I didn't see this one. I just know it's heartbreaking and I'm sure it's wonderfully done. I'll probably watch it someday, but I promise that Aaron never will. He won't see any movie that's "scary or sad."

Argo - I thought this movie was brilliant. It balanced levity and intensity. It had me on the edge of my seat and had me questioning whether or not they'd get out, even though I had just read an interview with the real dude played by Ben Affleck. To me, that's film making. And yes, I'm bitter that Ben didn't get a nomination.

Beasts of the Southern Wild - My God, was this movie depressing. But Quvenzhané Wallis was fierce and while she won't win for Best Actress, she deserves the nomination.

Django Unchained - I do enjoy Quentin Tarantino movies and this was no exception. In fact, it's probably my #2 fave of his after Pulp Fiction. There were definitely some disturbing scenes to watch, and it was probably longer than it needed to be, but Aaron and I both really liked it. Christoph Waltz was outstanding, and I think Jamie Foxx should have gotten a nomination. Hell, Joaquin Phoenix doesn't care about awards anyway so just boot him out (but I admit I haven't seen The Master so I can't really comment on his performance).

Les Misérables - A lot has been made of the fact that the actors sang live and it really did make all the difference. I thought the movie was well done and I didn't think I'd cry at the end but I did. There were some powerful scenes, but I also felt like some of it didn't translate well from stage to screen, particularly transitions between scenes. Still, it's worthy of its nomination. And I know some people don't agree with this but Helena Bonham Carter and Sacha Baron Cohen were perfect as the Thénardiers.

Life of Pi - Didn't see it. Really don't have a desire to see it. Sorry I'm not sorry about that.

Silver Linings Playbook - This is "a movie." It's not a spectacle, it's not based on a true story, but it's an actor's movie. And the acting was stellar. Bradley Cooper (who, by the way, still has time to fly me out there to be his date) proved he's for real and not just a pretty face. Jacki Weaver and Robert DeNiro showed the ranges of emotion as parents dealing with their son's mental illness. And Jennifer Lawrence made me like what could have been an unlikable character.

Zero Dark Thirty - Kathryn Bigelow was robbed almost as badly as Ben Affleck. I liked this movie, but was thrown off by Andy Dwyer Chris Pratt as the head of the team that got bin Laden. I thought Jessica Chastain was fantastic, but I hated the last scene of the movie. I love that Coach Taylor Kyle Chandler was in two nominated movies, this one and Argo. The raid scene was intense, but annoyingly dark.

I think Lincoln is deserving of the win, but I'm rooting for Argo.

In the other major races, I'm going with:

So I'm not going out on a limb at all, but trying to spread the wealth.

I'm hopeful that Seth MacFarlane doesn't bomb as host. It's a tough gig, to be sure, and I'm a huge Billy Crystal-as-Oscar-host fan so I tend to compare all other hosts to him. 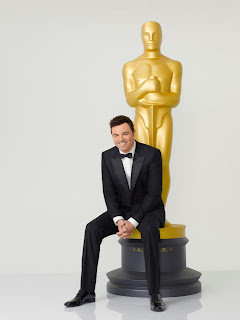 Check back Monday for my in-the-moment thoughts on the show.