Happy Halloween! Apparently Columbus is bracing for serious storms tonight which might cause problems for Trick-or-Treat. In our neighborhood we have ONE child and he's still young enough that his parents have convinced him that instead of going from house to house getting candy, he goes from house to house and gives out candy. That surely can't last much longer!

Last night was Yahtzee night at Theresa's house. She had some fantastic food, including chicken & dumplings and a pumpkin bread pudding that I may have to make ... someday. I didn't even see the cocktail napkins until I was leaving but y'all know I love a good cocktail napkin and this was perfect. 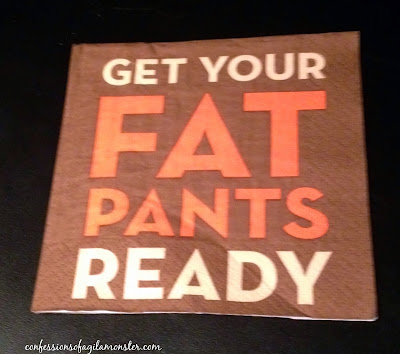 A couple months ago when Jeannie hosted, she had these, which I forgot to put on the blog but it's also a keeper: 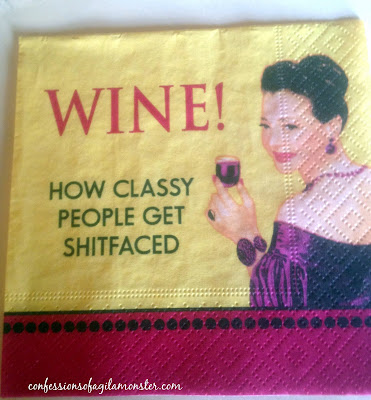 Speaking of fat pants, I saw this the other day and could definitely relate:


Yesterday a bunch of bloggers participated in a link up called "Someday I Will ..." One of my responses to that is someday I will not be such a huge procrastinator. Hahahahaha! But I did actually make a step in the right direction of that goal:


And finally, if you'd like a chance to win some PayPal cash in preparation for the holidays (or just for whatever the hell you want), check out Helene's blog, where I'm participating in a giveaway!