While reading some other blogs, I came across not one, but two topics that I feel like I need to share. 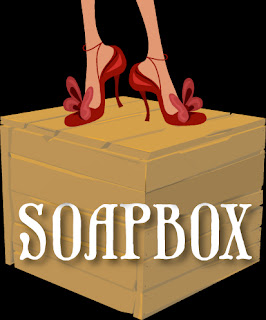 The first one is from Erin at She's a Big Star. Erin was one of the co-hosts of last Friday's blog linkup about football. The gist of it is that after Friday's post, someone contacted her about blogging about DirecTV's NFL Sunday Ticket. Sounds pretty cool, right? Erin thought so, too, except that the man's email specifically said that he wanted her to write about why men need Sunday Ticket. When she explained that she'd love to do the post but she's a woman, as are the vast majority of her readers, the guy replied that instead, they'd like her to blog about "How to Keep Your Home Safe as a Single Woman." So today Erin wrote an open letter in response to this person, and it's fabulous. You can read it here.

Next we have my real-life friend Steph at Life According to Steph, who posted today about oversharing on Facebook. I couldn't agree more, and I can't really say it much better, so I urge you to read her post. (You can find it here.) Steph and I are very similar in that we'll tell it like it is, but we're not going to post things that we know will hurt a friend's feelings or divulge something that's been entrusted to us. At least, not intentionally.

I've talked about my infertility, insecurity and bad habits. I'm honest here and on Facebook, but that doesn't mean I tell you everything. Facebook posts that expose skeletons in another's closet or seek attention without really saying what's going on (otherwise known as "vaguebooking") are unnecessary and immature. But let me be clear, if you choose to post such things, I will get my free entertainment out of it.