Tomorrow is Aaron's and my 22nd wedding anniversary. It's so hard to believe that it's even possible. Here are a few pictures from that day. So you don't have to do the math, the year was 1991, which should explain the big hair. 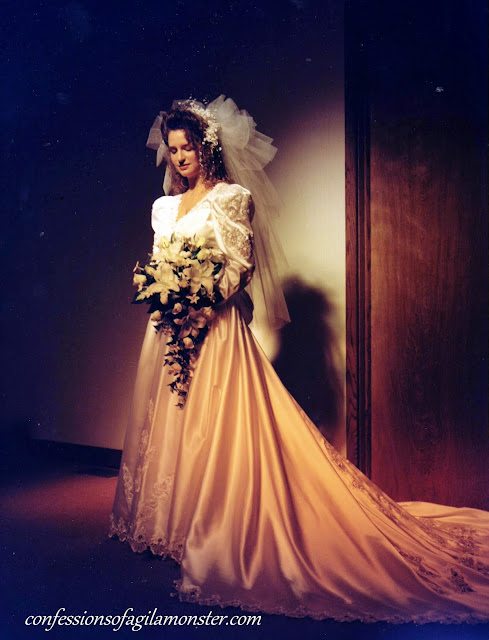 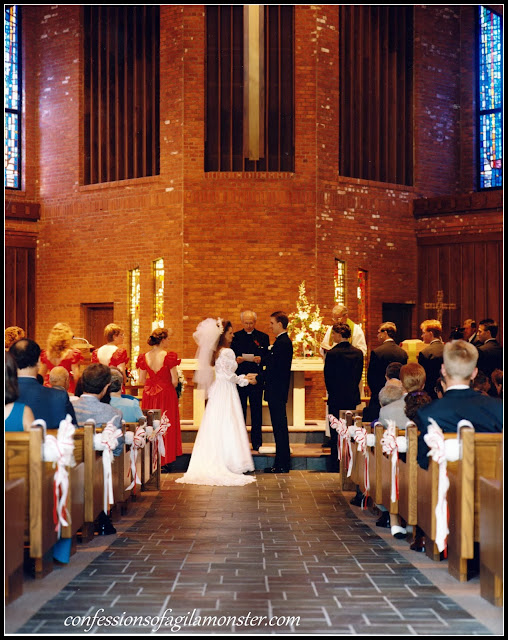 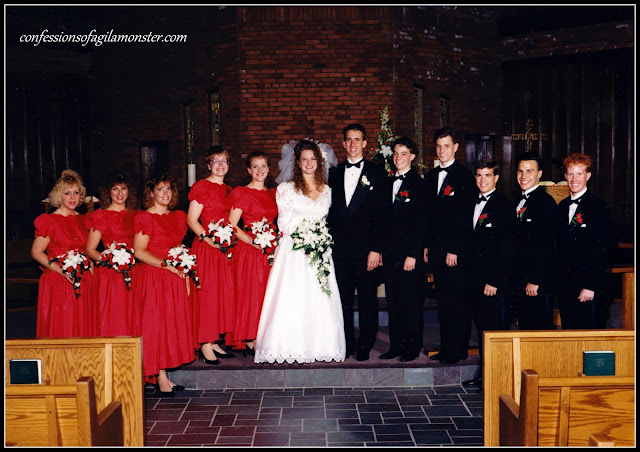 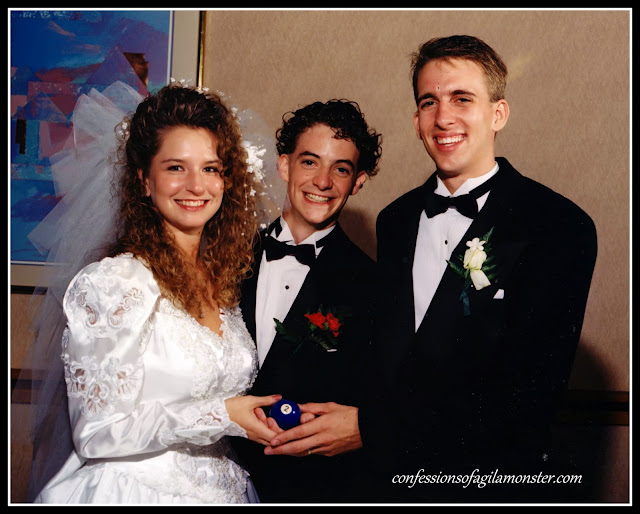 This is us with our best man, Ben. Aaron and Ben have known each other since they were 12 and they also went to college together so I've known Ben as long as I've known Aaron. To this day they're very close, even though we don't live in the same state. You may be wondering "what the hell are they doing with a 2 ball?" To explain that, here is most of Ben's best man speech:

"This week I helped Aaron move to Columbus, and while we were packing, I noticed (or maybe I should say failed to notice) a crucial item. A prized possession of Aaron's was nowhere to be seen. Vanished? Forgotten? Misplaced? Certain crisis, tragedy, trauma.

I don't know what happened to such a valuable object -- and I shudder to think of what Aaron's life must be like without it. So, I brought him a new one, a surrogate, a pale shadow of the true prize, but one I hope Aaron will be able to accept in its place. A 2 ball.

Now I suppose you may be curious as to the story behind such a treasure. ... In our freshman year at Wittenberg, I'm going to guess it was in the spring, probably about the time when Aaron and Gwen first began to see each other, Aaron came back from class to show me an important discovery. He had found an old, cracked, weathered 2 ball under a bush. He was thrilled, and displayed it for all to see on the shelf. That 2 ball then was displayed prominently in each room we ever lived in. Amazing -- the one constant through such wild times, this beaten-up 2 ball. And Gwen. From that point on, (shall we call it the 2 ball era?) Gwen and Aaron have been together. And today we celebrate their marriage and toast their future.

Karma is such a powerful player, aye? So you may understand why I was so distressed not to see the old 2 ball when I was helping Aaron pack. To tempt fate in such a way is unthinkable.

And so I give this new 2 ball to you both, so that the era may continue. Then I began to think what the ball means. Now that you are husband and wife, you are a circle, a sphere -- you two have become one. Just as the surface is smooth and glossy, the two of you complement and accentuate the best in each other to present a beautiful finish. And yet the ball is solid and weighty at its core -- made with great substance to withstand most anything. The two of you have a wonderful foundation to build on -- very solid, steady, tried and true. You have grown together, defined yourselves in each other -- so much so that when apart, there is a piece missing from each. I think you have become better together than either of you were alone. It has been a marvelous thing for me to watch and I thank you both for letting me share in so much of it. So I raise my glass (and the 2 ball) to you both to wish you nothing but the best."

We still have that 2 ball.

Please forgive this obviousness of this, but it must be done.