Ode to My Bro On (or near) His Birthday

My "little" brother's birthday was last Saturday, but because I'm lazy super busy and important I didn't get a proper birthday post put together.

First up, I failed to include this particular song in a previous post so I'm including it now. This was kind a secret code song for us and he was appalled disappointed that I forgot it.

My dad's first and middle names were John Willis. My parents' intention was to name my brother John Mark but to call him Mark. This is a practice that I just don't understand, and apparently even as a 2 3/4-year-old child I didn't get it, because I refused to call him Mark. Now, it could be that I called him John because that was my dad's name, but let's just pretend that I was brilliant yet annoyed even as a toddler. Anyway, we ended up using John Mark (or JM), although in school and as an adult he goes by John.

I've posted a few pictures from our childhood before, but I'll repeat a couple here, too. 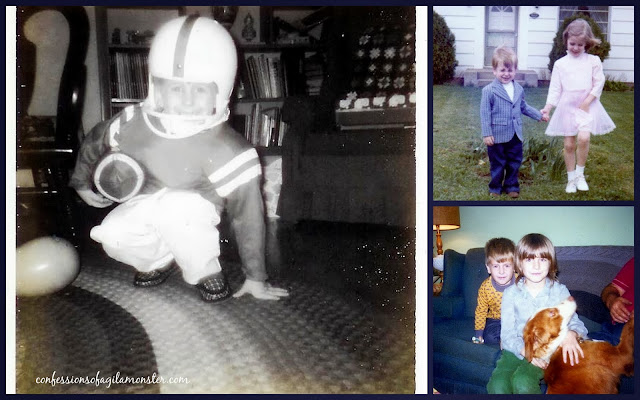 Despite the picture above, John Mark wasn't really an athlete, although he did play on the golf team in high school. He was in the marching band; he first played the baritone and then sousaphone. He's a talented musician, both instrumentally and vocally. He was also very interested in computers back in ye olde days (anyone out there remember the Commodore 64?)

John Mark and his wife Mozella have three gorgeous children who are all very talented in their own ways as well.

This week John Mark and two of the kids traveled to Ohio to visit my mom for a couple days and they came to Columbus on Gwensday for a baseball game.

For this week's #backthatazzup tune, I'm going way way back to 1978. This song was the B-side (raise your hand if you know what a B-side is) to "Sharing the Night Together" but it's fun and funny and we never got sick of playing it on our little record player.