How Can I Keep From Singing?

I didn't manage to do a weekend recap post, but let's just say it was full of friends, fun and fermented beverages. Sunday night we had our "home concert" to kick off our European tour. 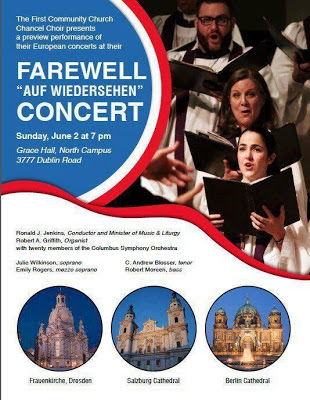 I've been dropping hints about this trip on the blog, but for those of you who don't know, here's the skinny. Our church choir is going on tour starting this Friday June 7th and returning Monday the 17th. We're traveling to Berlin, Dresden, Prague and Salzburg. Some highlights:

6/9 - Singing at the Berlin Cathedral for their Sunday morning service.

6/10 - Day trip to Leipzig and we'll sing at Thomaskirche, where Bach once worked and is buried.

6/11 - In Dresden, singing for Evensong at Frauenkirche (they originally said we could do two anthems but after hearing us they programmed four anthems). Then we go to Kreuzkirche to perform a formal concert.

6/13 - In Prague, informal singing at St. Vitus Cathedral, formal concert at Our Lady Before Tyn.

6/16 - In Salzburg, we'll do the Mozart Missa Longa during Mass at the Salzburg Cathedral (where Mozart was baptized and where he performed when he was a court musician until he got pissed at the Archbishop and quit.) That afternoon we'll also give a concert at the Cathedral.

Now that I've typed that out, it's feeling even more real and the best part is that I get to experience this with Aaron and with some of our closest friends.

As I said, we gave a concert Sunday night to preview a lot of the music we'll be singing. And guess what? You can watch said concert here: http://fcchurch.com/farewell-concert/. I certainly don't expect you to watch all 2+ hours but here are several songs I highly recommend.

In Part One at the 25 minute mark: Biebl Ave Maria - it's a good thing this is men only because I was crying during this piece. Right after that is Eric Whitacre's Lux Aurumque - imagine what this will sound like in the cathedrals. Then Praise to the Lord by Christansen - when you hear the women split into 4 parts and you're thinking "wow, the low altos rock," one of those is me.

In Part Two at 20:30: Precious Lord, Take My Hand by Howard Helvey, a Cincinnati composer and friend of the choir who was at our concert. This arrangement is just freaking gorgeous (you might have to turn up the volume). Also, toward the end there's an extended close up shot of me and I don't look too terrible (unlike most of the time on camera).