A boy and his bike

When I was diagnosed with breast cancer, I completely took for granted the fact that I live in a city with superb medical facilities and surgeons. In fact, we joked that I had to go to a hospital 20 whole minutes from home, instead of the one that's about 7 minutes away.

Then I started reading other people's stories about how they had to fly to another state or drive 7 hours to get treatment. And then what about their caregivers? The travel and lodging could get really expensive. The American Cancer Society has facilities called Hope Lodges which provide a free place to stay for patients and caregivers who have to travel far from home for surgery or other treatment.

On Friday I mentioned that Aaron would be participating in a bike ride going from one end of Ohio to the other. It's called the Pan Ohio Hope Ride and it's a fundraiser for the American Cancer Society and more specifically, for Hope Lodges. He rode 328 miles with 400 or so other riders over a four day period.

For those of you who didn't see Facebook or Instagram posts, here's how the weekend went for him.

On Wednesday he boarded a bus that took him to Cleveland. He stayed in a hotel downtown and was up bright and early for the start of the ride. He took this picture of the Browns' stadium, Lake Erie and the Rock and Roll Hall of Fame: 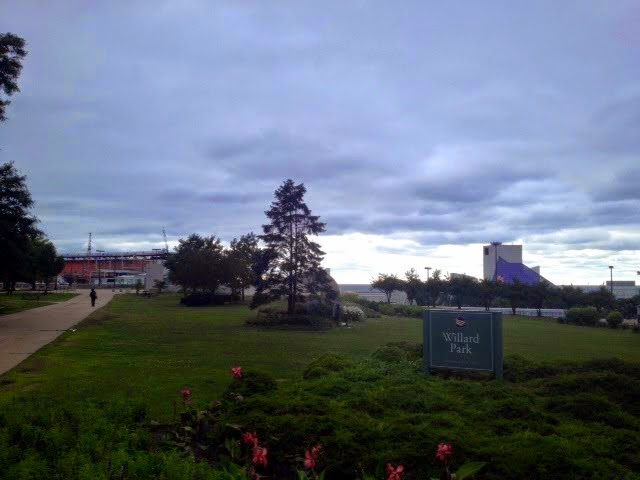 Day 1 went very well. The temperatures were cool, the wind was at their backs and they biked about 75 miles to the College of Wooster. Aaron opted to camp each night, which is quite something since he probably hadn't spent a night in a tent in over 25 years.

Day 2 was the longest day, in which they rode from Wooster to Otterbein University in Westerville, a suburb of Columbus. This ride was about 100 miles and went through Amish country and included some sizeable hills. Still, he felt pretty good, and again the weather was lovely. Aaron easily could have decided to sleep at home this night, but he stuck with the tent.


Day 3 - Aaron overslept, and had to haul ass to catch up with the rest of the riders. Fortunately, they had a police escort through Columbus so the group wasn't moving too quickly. I got to see him riding down High Street not too far from our house. This was another 75 mile ride ending in Springfield at Wittenberg University, our alma mater. Aaron said it was the hardest day. It was very flat and they didn't see any rain, but they were traveling due west into a headwind. Once they arrived and were safely consuming pizza and beer, the rains came. He ended up setting up his tent inside a dorm. 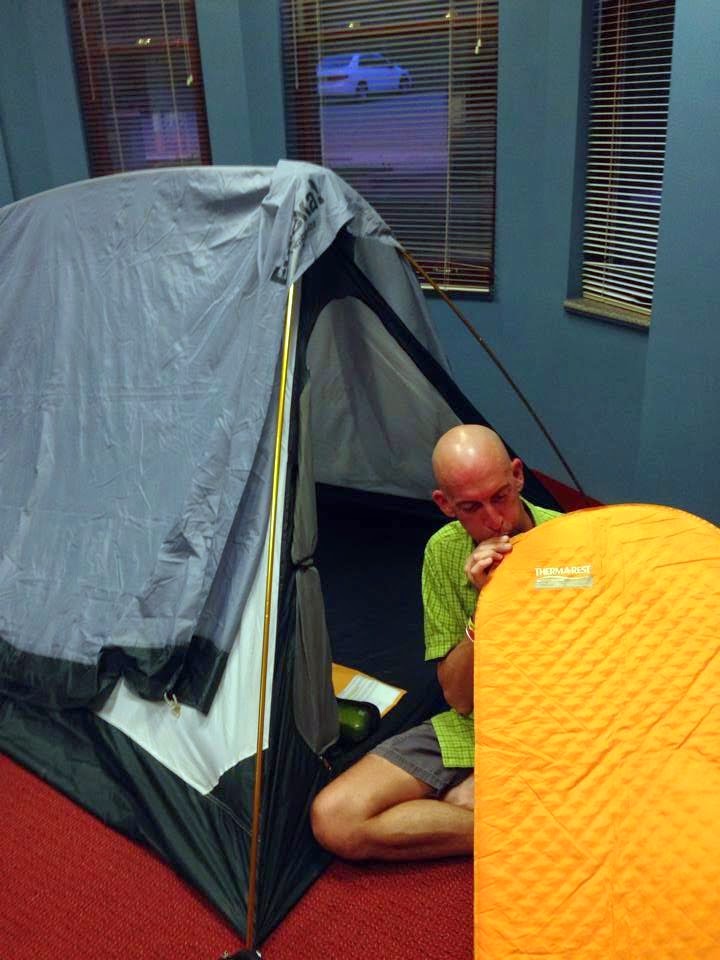 Day 4 they rode about 80 miles to downtown Cincinnati. On this day they finally had some heavy rain, but still made pretty good time and arrived around 2:00. Aaron's parents, his sister and her family, and one of his best friends were all there to greet him. 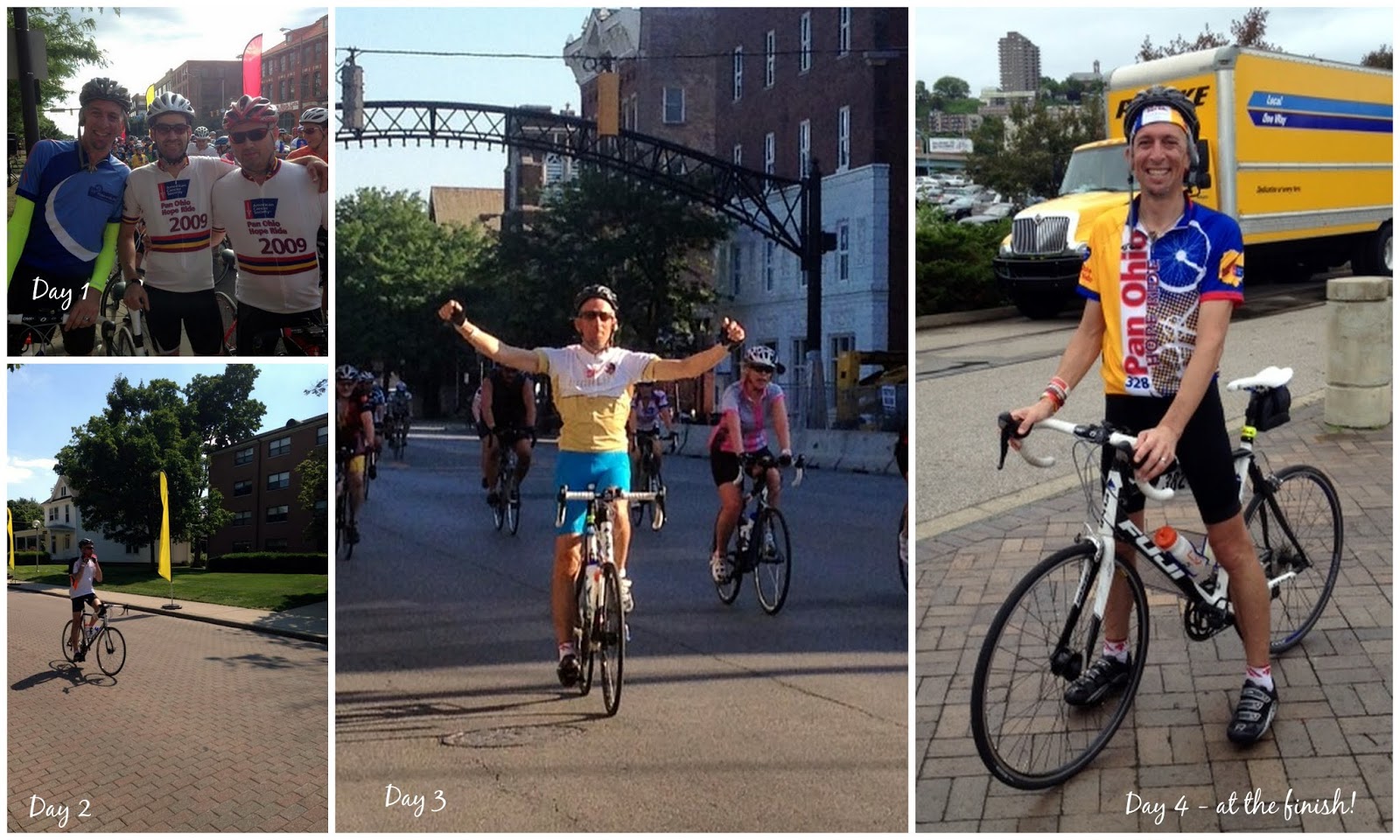 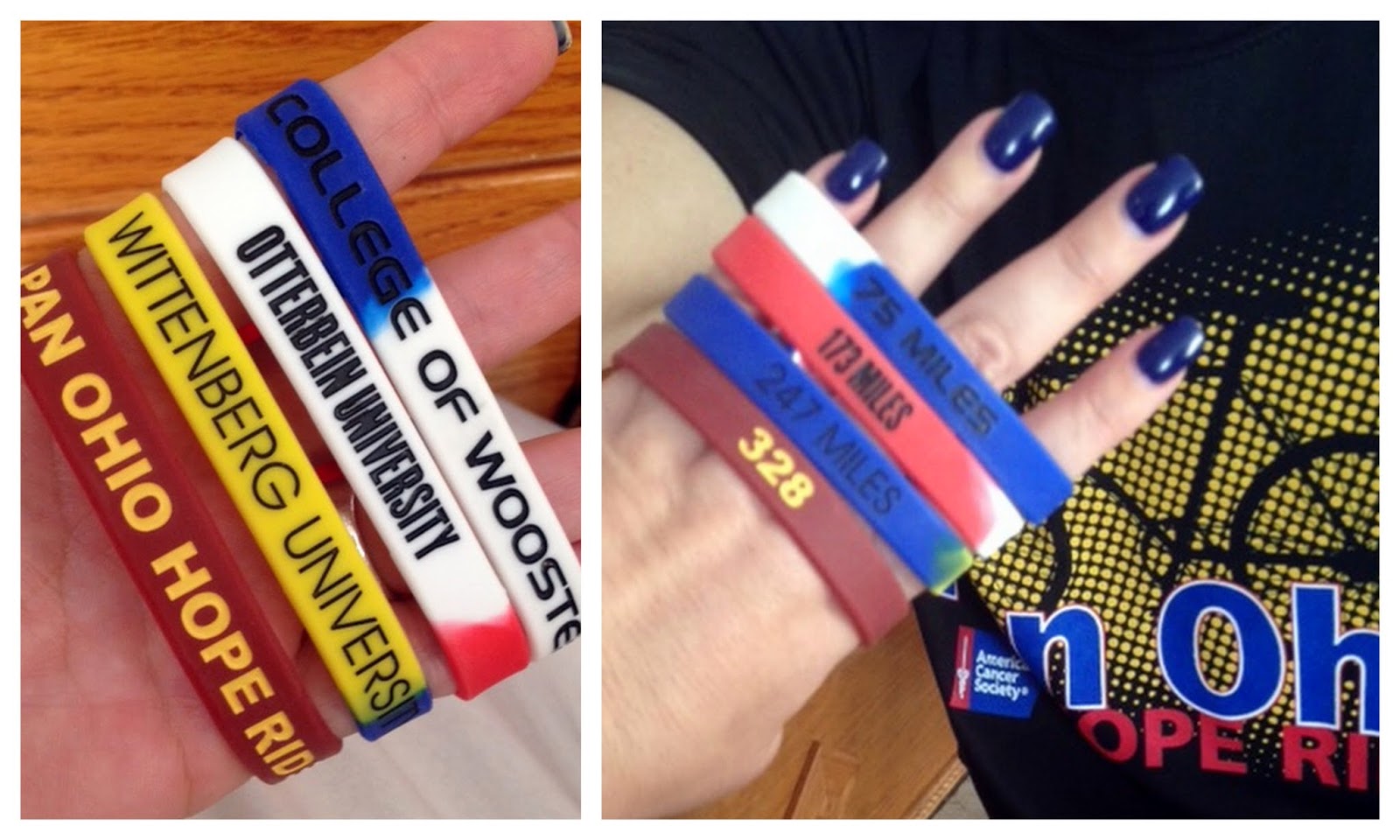 He has complained about some soreness, but I seriously sometimes wonder if he's human because he seems totally fine. He even got on his bike last night to go to a customer's house. Of course, those of us who know Aaron aren't that surprised. If you don't know about his recent history with bicycles, you can read about an accident he had almost four years ago. Given all that, it's even more remarkable that he was able (both physically and mentally) to do this ride. But that's just how he rolls. Pun intended.

Thank you all for your support and well wishes!