A Day of Remembrance ... for more than the obvious reason

As Americans -- hell, as human beings -- we remember September 11th as a day of unspeakable tragedy and terror. But beginning last year, September 11th has a much more personal meaning for Aaron and me. It was one year ago today that Aaron had his bicycle accident. That day and a few that followed were the scariest days I've known. Of course, this story has a happy ending, but I'm compelled to write it out just the same.

It was a beautiful fall morning. It was also a big college football Saturday, and in our house, college football is king. Aaron's favorite Ohio State was playing Miami (before both schools got into the trouble they're in now), and that night my team of choice, Penn State, was playing Alabama. We had plans for the neighborhood to come over for the night game, and we were looking forward to a day of watching football. Aaron was in training for the Columbus marathon, and he was supposed to run that morning, but he got stuck on a phone call and realized that he had run out of time to do his long run. I was planning to go for a bike ride so he decided to go riding with me and do his run the next day.

We rode about 12 miles and when we got to the point where we would turn toward home, we split up. I went home so I could get the car and drive out to our vet's office to pick up cat food (because of COURSE our cats are on special food), and Aaron wanted to stop at a convenience store to pick up some cigars for the festivities. He had my phone with him; it was in the saddle bag on his bike, and I didn't have any way to carry it.

We're not sure what happened next because Aaron has no memory of the accident. We do know that he got the cigars and somewhere on 5th Avenue near Olentangy River Road he wrecked the bike. There was a witness; his name is Bob but that's all I know. There was no car involved. We think that he hit something and the front wheel came off, and he just flipped over the bike, hitting his helmet on the pavement and landing on his back. Bob the passerby stopped and checked on Aaron, who was able to talk, although he did lose consciousness at some point. Bob flagged down a fire chief who then dispatched paramedics. Bob also started calling people from my phone. He eventually talked to my friend and coworker Kendra, who unfortunately didn't have any other phone number for us except the one Bob was calling from. Then someone (a paramedic or someone at the hospital) got in touch with our neighbor Amy, who was at work but luckily had her cell phone with her. Amy called her husband Colin, and he and other neighbors came over to the house to try and find me.

Meanwhile, I was obliviously picking up cat food. I pulled into the driveway, and there are about eight people outside the house, including friends from Cincinnati who were going to the football game. I'm thinking Aaron's home and we're starting the fun early. Then they told me what happened. I spoke with someone at the OSU hospital and found out that Aaron was awake and talking and that I needed to get over there. Our neighbor Sara went with me, and I'm eternally grateful to her (and by extension, her husband Matt and their son Zac). We got to the ER, and Aaron had on a neck brace, which I assumed was just precautionary, and he was pretty banged up, but I truly thought he'd go home that day. 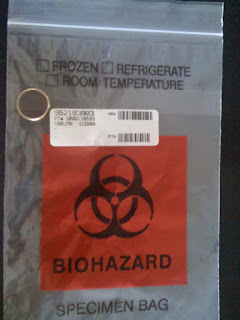 Apparently his wedding ring was biohazardous﻿

I remember that Aaron was very cold. He had many blankets on him but he kept shivering. He also kept asking the same questions over and over. He kept asking Sara where Zac was (as if we had left the then-seven-month-old in the car or something). He also didn't remember that we had split up on our bikes; in fact, when he was found he kept asking, "Where's my wife? Is she OK?" He had many doctors come and look at him, and he had some stitches both inside and outside his mouth. Then a nurse said something about finding a room for him, which was the first I knew he was being admitted. Then another nurse said something like "we need to put in a catheter since he won't be able to get up because of his broken neck." Um, excuse me?

When they moved Aaron to his room they told us to follow along. When we went into the Neurosurgical ICU, I think Sara and I looked at each other in shock. What the hell was going on? We didn't get a whole lot of information for a while. They put us in the "family room" and we waited. Then I started making phone calls. I talked to Aaron's parents and his sister Stephanie, who all live two hours away in Kentucky. I told them there was no need to come up just yet. Then I talked to his sister Cynthia who lives closer. She just said "I'll be there in an hour." I'm not overstating when I say that Sara and Cynthia, along with some other friends and neighbors, got me through those first couple days.

Aaron was pretty out of it, as he had finally been given some pain medication. Very gradually, we learned the extent of his injuries and that he would not need surgery, but he would be in a neck brace for 10 - 12 weeks. He had broken the C4 vertabra, and had also fractured T4, 5 and 6, as well as the left scapula. He had the stitches in his mouth, a concussion, and some nasty scrapes on his shoulder, hip and arm. He was in ICU for three nights. He could have left ICU after the first night but they didn't have a regular room for him.

We did have a few moments of levity. On Sunday morning, Cynthia and I were there bright and early because the surgeon was supposed to see him and determine if he needed surgery or not. After the doctors left, Aaron was moving his arms back and forth (remember, concussion AND pain meds). I asked if he was dancing and he said "no, I'm practicing driving my car." Then he was insistent that we should all go out for breakfast. He kept saying, "get that nurse person," and when we didn't, he picked up his bed remote like it was a phone receiver and he was trying to telephone the nurse. Cynthia and I laughed so hard we cried. And other times we just cried.

But on Tuesday, Aaron came home, and proceeded to heal quicker than I think anyone thought possible. We credit that to his marathon training, and the fact that he was in such great physical shape. He was released from wearing the neck brace after six weeks. He went to physical and occupational therapy, but not for long. 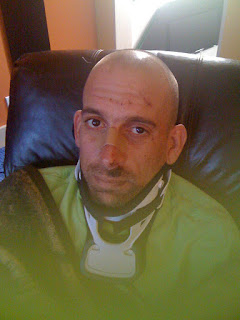 Shortly after being released from the hospital﻿

A year later, you'd hardly know anything had happened. He has a small scar above his lip and some scars on his shoulder and hip, and his front four teeth are numb, but that's all a small price to pay. In the spring he bought a new bike; the frame of the old bike hangs on a wall in our bedroom as artwork. Our friends bought him a new helmet; the old helmet was split in two (and it WAS an old, old helmet but it did its job). Of course, he was unable to run the marathon last fall, so this year he's in training again. Today, on the anniversary of the tragic events of 9/11/01 and the accident of 9/11/10, we went to church to participate in a special service of remembrance, and then Aaron ran 18 miles. And he made a point to stop at the spot of his bicycle accident, to say "I'm still here." And I'm so thankful that he is. 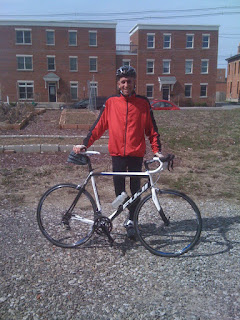 With his new bike and new helmet
Posted by Gwen at 10:35 PM