Note to self: come up with better titles.

If you live in Columbus, you might be aware of a hidden gem called Bungalow Jazz, also affectionately known as Becky's Bungalow. It's actually Becky Ogden's home, and she opens it up for musicians who perform house concerts. There's a suggested donation which varies depending on the artist, it's BYOB, and patrons bring snacks to share.

Most of the performers are local, but for two nights this week, Maureen McGovern was there testing out a new show called "Sing, My Sisters, Sing!" If you don't know who Maureen McGovern is, she's probably best known for singing two Oscar-winning songs in the early 70s. "The Morning After" won for 1972's The Poseidon Adventure and "We May Never Love This Way Again" won for 1974 's The Towering Inferno. Also in 1974, another song McGovern recorded was nominated and oddly enough, it was for another disaster film. Who knew disasters produced such music? Another fun fact: McGovern played the singing nun in Airplane! in 1980. (And if you've never seen Airplane! you should drop everything and find some way to watch it, but that's for another post.)

I was fortunate to go to last night's show. I did not take any pictures. I just wanted to soak it all in. It's such an intimate setting; I was sitting about six feet away from her. There was just her and her pianist, who also arranged all the songs. She sang for 90 minutes, with no break. Here's a peek at the promo: 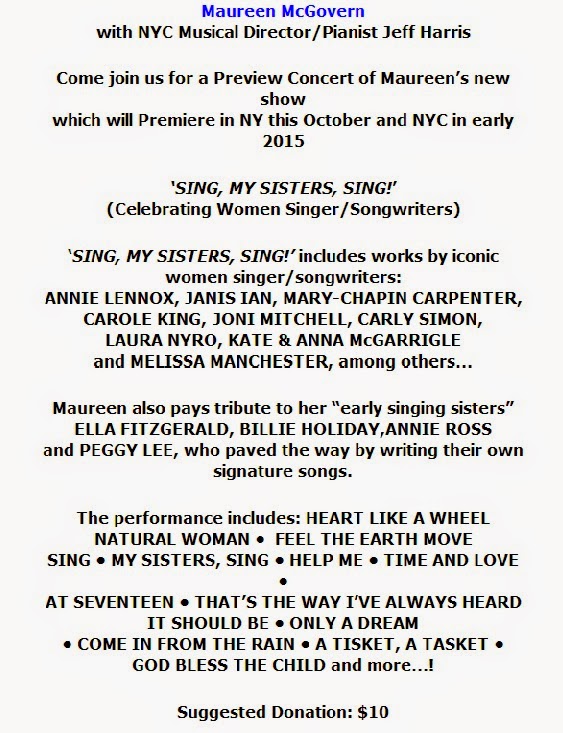 Yep. Ten dollars. Talk about a bang for your buck!

Email ThisBlogThis!Share to TwitterShare to FacebookShare to Pinterest
Labels: singing