Today's topic is nicknames. You already know how I got the name Gila Monster. Here are some other terms that I use.

Biscuits and Pleasures
I can't even remember how long it's been that Aaron started calling slippers "biscuits." I don't even know why (and I don't think he does, either). But that's what he calls them, and now we have loads of people all over the country calling them that as well.

"Pleasures" are flannel pajama pants. This term was coined by Aaron's sister Stephanie who turned us on to them years ago and said that when you put them on fresh out of the dryer, they are "pants o' pleasure." We've shortened it to pleasures, and it can also refer to yoga pants or sweats; basically your comfy clothing.

So, the next time you get home in the evening after a long day, or tomorrow morning when you're up and making coffee, put on your biscuits and pleasures.

Joy
This is what we call Tabasco sauce. 'Nuff said.


Spidey, Sappy and Boo
Spidey is Aaron. This is a great nickname for him because he climbs on everything. He should also be great at yoga because he can position his body in ways that most of us can't comprehend. 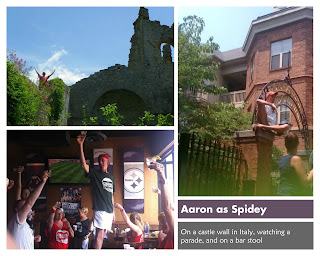 Sappy is his sister Stephanie. Our niece Lauren couldn't say "Aunt Stephanie" when she was little, so it came out "Aunt Sappy," and the name stuck. Lauren also went through a phase in which everyone was Uncle so I was Uncle Gila and Steph was Uncle Sappy, but she now has the genders figured out.

Boo is the youngest sister, Cynthia. That nickname has been around since before I met her, and Aaron still calls her that. This can get confusing because to nieces and nephews, Aaron is "Uncle Boo." (And that one started when our oldest niece Jacqueline was little and Aaron would play peek-a-boo with her.)


Bad Boiler
This refers to an upset stomach. It was really funny when Jacqueline was visiting us (she was maybe 5 at the time?) and I wasn't feeling well. Aaron kept saying "Aunt Gwen has a bad boiler." Then Jacqueline went home and one day in the grocery store they walked down the aisle with the Pepto Bismol and she asked her dad "is that what you get when you have a bad boiler?"


78
You know the saying, "six of one, half dozen of the other," meaning that with either option you get the same result? Well, Aaron used to say "six and a half dozen." When I finally clued him in to the real phrase, I said, "what you're saying is 78." And so now, whenever we have a choice of two similar options, we just say "78."

So there's a little insight into our secret code words. What are some of yours?