As you may remember, MoJoe Lounge is connected to Cup o Joe, both by ownership and physical space. Prior to this visit, we'd only been to MoJoe for drinks. We've heard high praise for their brunch, particularly the Bloody Mary, which has Guinness in it. We did not go for brunch; also, we were there for the fall menu, and they recently switched to their winter menu, so much of what I write about may not be available now. Oh, the trials of following a strict restaurant order.


We walked to MoJoe on a Friday evening, which also happened to be Aaron's birthday. Naturally, we started with drinks. Aaron had an Oak Heart Ginger Mojito, which he declared to be fresh and delicious. I had the Pumpkin Martini.


Friends, if you like pumpkin pie, get yourself to MoJoe (assuming it's still available; the martini special now is probably some kind of peppermint nonsense). This concoction is served in a glass rimmed with cinnamon and sugar, and it's so smooth and autumnal that I forgot the rule about martinis.


While "sipping" on martini #1, we shared the Hummus Plate (cilantro-lime hummus with pita and veggies and feta). The pita bread was warm, as it should be. Don't even bother serving me hummus with pita unless it's warm. As we like to say, this was a delightful snack. 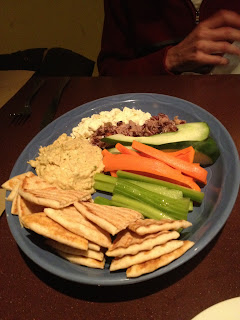 Martini #2 probably arrived before we even ordered the next items. Aaron switched his drink to an Espresso Martini. I ordered a grilled cheese sandwich, which included gouda, monterey jack and cheddar cheeses, and fries. Aaron ordered fish tacos (which they had to redo because he had ordered no sour cream and they came with sour cream on them at first).


For "dessert" Aaron had a pint of porter. I had martini #3.

So far on our tour, this was our favorite. Cozy ambiance, quality food and fantastic drinks. Needless to say, I went to bed rather early that night. But it was worth it.

Spidey and The Gila
Posted by Gwen at 5:28 PM