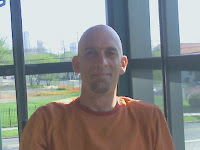 Our great restaurant odyssey continued when Gwen and I went to Bar 23 for dinner and drinks recently.  The day had all the makings of a great, maybe even epic evening.  We had both arranged our schedules to be able to leave the house on a beautiful Friday afternoon to walk down to enjoy a nice early dinner, have some cocktails, and see where the evening took us. 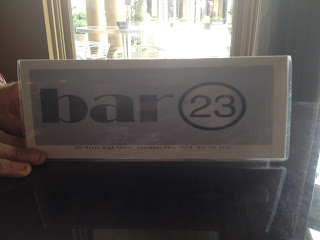 Neither Gwen nor I have been to Bar 23 so it was a new experience for both of us.  While I personally haven't been able to confirm this, Gwen is somewhat certain that Bar 23 is one of the oldest tenants on the actual I-670 cap.  Friends have told us "I think it was once a men's fashion shop," or "wasn't there a nail salon there once?" or similar unclear recollections.  I suppose if I did some major research (or cared a bit more) I could figure this out, but suffice to say, Bar 23 has been there a while.  [Editor's note: while the 670 cap has been around since 2005, Bar 23 has been in existence since 2008.] It is a large space - a huge interior with bar and 5-6 flat screen TVs, crazy lights and cameras on the ceiling, and an enviable patio on the sidewalk.  My sense is this is a trendy place where lots of beautiful people hang out into the early hours to see or be seen.  When we arrived at 4:00 we were the first patrons of the day, having watched the bartender unlock the door as we approached.  As neither of us had eaten anything substantial yet we were anxious to get some food, but in service to our many readers we also ordered cocktails from the happy hour menu.  Gwen had a Mangotini and I had a Pomtini.  I can't tell you exactly what was in them but let's just say they were tropical fruity neon colored.  With booze.  Well chilled, they arrived quickly as we surveyed the menu.

Obviously Bar 23 isn't a place known for its high cuisine but the menu wasn't horrible - an assortment of appetizers, a few entrees, and sandwiches were available.  Think bar food, I suppose.  We both ordered paninis - portabella/goat cheese for Gwen and the Italian for me - and we got an appetizer of pot stickers.  On a bed of shredded lettuce (right out of the bag I suspect) came the pot stickers, with a dark syrupy dipping sauce.  Since we ate them and I'm alive to write this review they'd classify as edible, but the freezer burn was the first hint that our dining experience wasn't going to be awesome.

With our second round of cocktails came the paninis.  I won't bore you knowledgeable readers with the makings of a great panini - essentially delicious ingredients between two thick, grill-marked slices of Italian bread, right? - but there was none of that here.  The sandwiches weren't so much grilled as maybe pan fried for like 30 seconds. The bread was soggy rather than crunchy, and the ingredients were certainly not fresh.

This being said, both Gwen and I finished our meals completely since we were pretty hungry.  On our walk home we agreed that, had we been nourished earlier in the day, we probably wouldn't have finished our sandwiches.  Was it horrific? No.  But I'd have to be hungrier than I was that day, and all of their competition closed, to ever return.

Sorry, Bar 23.  We're sure you are good people, you probably do a great business selling fruity drinks and beers to beautiful people, and those beautiful people get inebriated enough to order some food that you provide.  Hell, Gwen and I have both spent many a dollar at your type of establishment in our years, and who knows, being beautiful people ourselves we'll do it again someday.  But probably not at your place.
For those of you interested in our social scene - we left Bar 23 around 5:30 pm, full but disappointed.  Not the formula typically needed for an epic evening.  But please remember we live where we do.  Home - beer - sun - porch - neighbors - music - stereo - dancing - bed at 2:00 am.  Epic.


Stay tuned - I promise there will be more to come very soon!