You want to call me WHAT?

For those who don't know, here's the story of how I became the Gila Monster.

Many years ago (at least 20), my husband Aaron was reading a magazine about Arizona and saw an article on the gila monster, and he declared "I'm going to call you Gila Monster from now on." And he did. He rarely calls me by my actual name, instead using various forms of Gila Monster: Gila, The Gila, Monster, etc. (that is, when he's not calling me by one of his sisters' names or something else random). Now, the correct pronunciation is HEE-la, but that's not how Aaron says it. He pronounces it GEE-la, with a hard G. Some family members use it as well, especially our three nieces on his side who all call me "Aunt Gila."

If you're not familiar with my namesake, it's a venomous but sluggish lizard found primarily in the southwestern United States. As it turns out, "venomous but sluggish" really can be used to describe me on certain occasions, but we'll probably get to that at a later date. The gila monster is also not really attractive (I choose to believe that is not a trait that Aaron uses to describe me). It looks something like this: 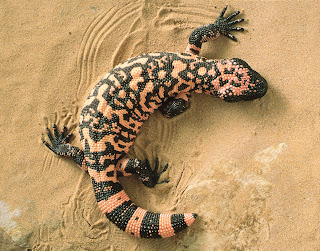 For one of my birthdays when we were first married, we had a little party. Aaron gave me this T-shirt, in front of everyone. I still have it. 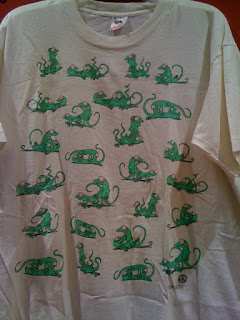 So there it is. I am the Gila Monster, and once I decided to pull the trigger on blogging, I knew that name had to be part of the title.

Email ThisBlogThis!Share to TwitterShare to FacebookShare to Pinterest
Labels: About Me