So Many Shows, So Little DVR Space

Hello, my name is Gwen. I'm a TV addict.

I'm not sure when my addiction began, but it was probably in high school. I had an old black & white television in my bedroom. No cable, just three channels on a good day, and I would often leave it on all night. Of course, those were the days when stations actually signed off late at night, the national anthem played, and the screen turned to fuzz (yes, I'm that old). 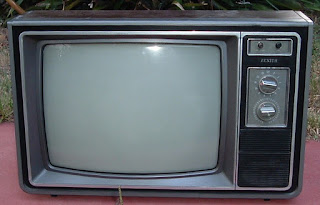 I also got hooked on soap operas as a kid. I can remember watching "the stories" with my grandmother while she did laundry. Over the years I watched lots of different soaps, but one of my favorites was Days of Our Lives. In college, I can remember a bunch of us gathered in the dorm lobby to watch Pete & Melissa and Mickey & Maggie's double wedding on Valentine's Day, 1986. I probably skipped a class to watch it. 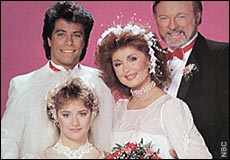 After college I started my love affair with the VCR, which lasted at least 10 years. At its peak I had two VCRs. I numbered the tapes, and had a corresponding list of what was on each tape, which of course would change since every time I watched something I'd replace it with another show.

And then came the greatest invention in my lifetime: the DVR. Aaron bought one for me for Christmas one year and it changed my life. And then cable companies started incorporating DVRs into their cable boxes. AND I could record two shows at once! 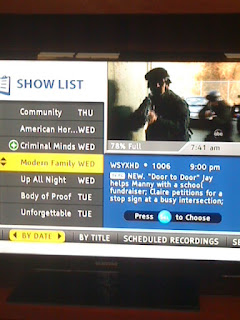 My partial list of recorded shows as of today

Now that the fall season has started, I'm faced with scheduling dilemmas as I try to figure out which shows I should record on the DVR versus which shows I can watch On Demand, all the while trying to keep space free on the DVR. I watch all kinds of shows, but I gravitate toward crime dramas. I finally got on the Criminal Minds train thanks to A&E and Netflix and I'm almost caught up to the present season. I've seen every episode of the original Law & Order and yet I still watch it in syndication on TNT. I also like clever comedies, and I think Modern Family is the funniest show on TV right now. And while I don't keep up with the daytime soaps (the few that are left), I do love a good melodrama, and my current obsession is the new ABC show Revenge. We're only three episodes in but I love this show and can't wait for the next episode.

A couple side notes: Aaron tolerates my addiction but doesn't quite share it. He does enjoy Modern Family, and a couple of his dearly departed favorites were Arrested Development and Northern Exposure.

Also, since I rarely watch anything "live," other than sporting events and awards shows, I don't see many commercials. But this one has become one of my favorites. It's a Volkswagen ad that has recently been resurrected to coincide with the release of the Star Wars on Blu-Ray. This clip is the longer, original version. I love it.