Spoiler alert: this is NOT a complaint letter.


On May 11, 2016, I flew with my husband to San Diego from Columbus with a layover in Chicago. Upon boarding the second flight I realized that I had left my Kindle in the seatback pocket on the first plane. I notified a flight attendant, gave her a description of the Kindle, and she said she would see what she could do. At some point during the flight, she found me and said that they had tried calling the gate agent to no avail and suggested that I fill out a Lost Item form on United's website.

I filled out the form and received several update emails that United was "still searching" for the Kindle. I had described it as best as I could, but I had bought it from my friend Lisa so I didn't know the serial number. I said it had a burgundy case with an attached light and that it was called "Gila's Kindle."

I knew that you would only search for my item for 30 days, and after two weeks my hope was waning, but on June 2nd I received a voicemail, a text and an email letting me know that it had been found! I filled out more information and I did have to pay for shipping (but I didn't mind since it was my own dumb fault that it was missing in the first place) and that same day I received tracking information. I admit to being overly excited about this.

The Kindle arrived at my home on June 6th, and we have been reunited. 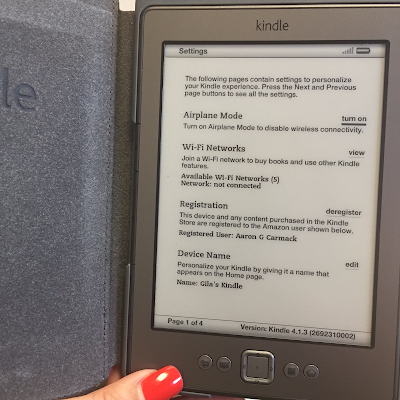 I'm writing this for two reasons:

Email ThisBlogThis!Share to TwitterShare to FacebookShare to Pinterest
Labels: gratitude