Tattoo You, Tattoo Me

To ring in the new year, I got my first tattoo. It started when my niece, Jacqueline, wasn't able to get her second tattoo for her 18th birthday due to the need to spend money on silly things like going to college. So I told her that at Christmas I'd get her one and I'd get one, too. Jackie is an art major, so I told her to come up with some ideas for what would eventually become a permanent part of my body. We didn't have Christmas with my side of the family until New Year's, so on December 31st, the two of us went to get our tattoos. 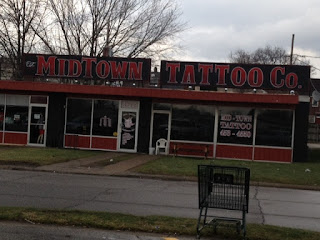 Midtown Tattoo in Erie, PA (and yes, that's a hateful stray shopping cart in the foreground)﻿

Since it was New Year's Eve, they were short-staffed so they weren't sure we'd be able to get in that day, but they called us later and we had an appointment for 5:00. Will was our tattoo artist, and yes, I failed to get a good picture of him. 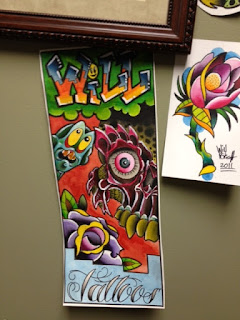 I went first, and it really didn't hurt that much. It burned some and kind of felt like the stim therapy I've gotten at the chiropractor or physical therapy. It took about a half hour and here's the result: 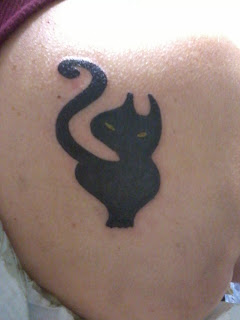 My ink, on the back of my right shoulder. Jackie drew this design for me.﻿

Then it was Jackie's turn. Hers took more like an hour and a half. She didn't design this one but it's totally her style. It's on her right inside forearm and it's what I would call a punked out Alice in Wonderland. 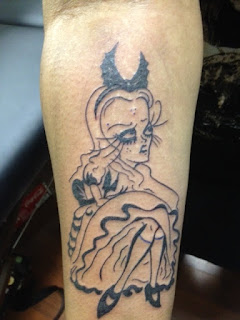 And the finished version: 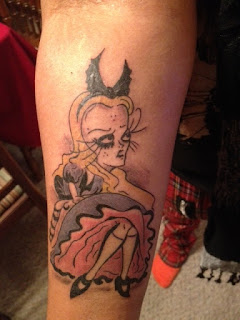 I don't have any previous tattoo parlor experience, but I was really impressed by Midtown Tattoo. Jackie declared it the best day ever! My mother would disagree, but oh, well... I love my black cat and I love even more that it was designed by my wonderful, talented niece!