If you're on social media at all, no doubt you've seen the "ten year challenge," in which you post your profile picture from ten years ago and your most recent one. It's also described as "how hard has aging hit you," which ... whatever. We all age. We all age differently. I know for myself, the last ten years have been tougher than any other ten year period in my life.

Over the last few days I've been struck by a different thought regarding the last ten years. Ten years ago this past weekend I was in Baltimore with my friends Steph, Mimi, and Gena. This year I was in Washington, DC with the same friends, plus Debbie and Melissa. 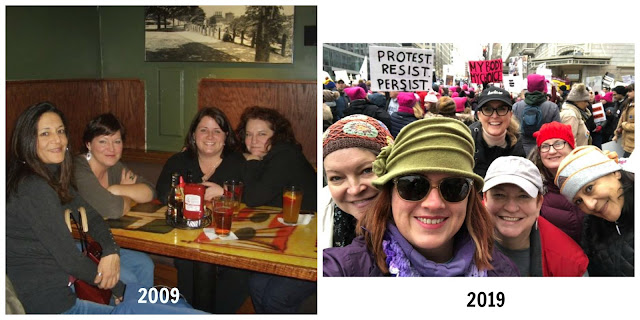 I made sure that the 2009 picture is from the start of the evening, as the later pictures are quite, shall we say, boozy.

In 2009 our routine was heavy drinking and karaoke on Friday night, napping and movie watching on Saturday, and a steak dinner Saturday night. In 2019, we mostly stuck to our Airbnb, binge-watched The Great British Baking Show, did facial sheet masks, and enjoyed catching up in person.


Ten years ago, after a great girls' weekend, I met up with Aaron and our friends Steve and Dwayne to go to the first inauguration of Barack Obama. (We didn't have tickets; we were among the throngs of people watching on jumbotrons from the Washington Memorial.)

This year I went to the Women's March. 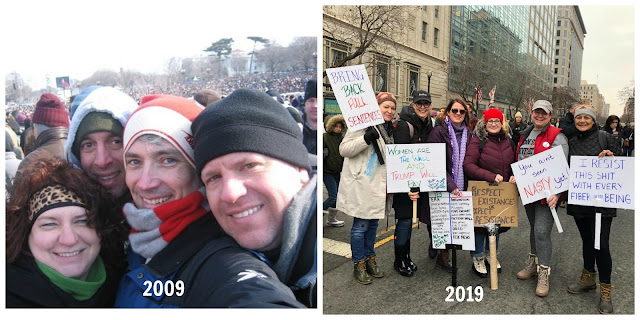 It was extremely cold in 2009. In 2019, it was chilly but not bad, and we got lucky because the forecast called for rain and the rain held off until we were snugly back in front of the TV.

This was my first Women's March but I felt pretty strongly about attending this year. I wanted to put my money where my mouth is, so to speak. 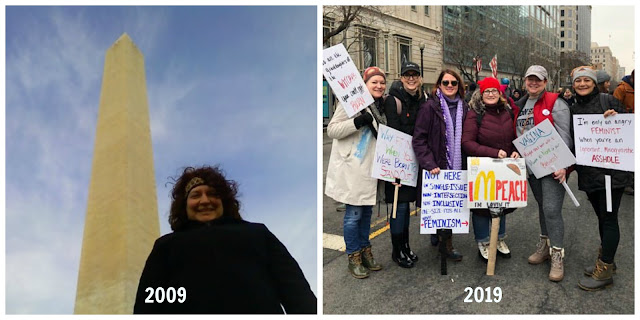 In 2009 we were excited to be part of history, witnessing the first person of color become President of the United States.

In 2019 I'm angry and I'm tired and I'm frustrated. But being surrounded by people with their kids and their signs and their commitment gave me hope. And being with my girls (old and new friends) filled my soul.

The change in the buttons I wore.


Sometimes a ten year change is more than the grey in your hair or the wrinkles on your face.