A couple months ago, Aaron mentioned that ZZ Top was coming to town on October 3rd and started talking about maybe going to the show. Me: eh, maybe.

Cut to October 3rd, 9:03 am. I get a text from Aaron that just says "ZZTop?" My initial thought is, no, I don't feel like it. But, seeing as Tom Petty just died and I never saw him in concert, I changed my mind and texted back "Sure."

3:12 pm - email from Aaron with a link to a concert review saying "Looks like lots of seats available. I think we should go."

Me: I already said yes. Buy the tickets.

I mean, take yes for an answer already!

So after work, we took the bus downtown and ate at an Irish pub (question: when you order fish & chips, are you expecting sweet potato fries? I was not.) and then went to the Palace Theater (Columbus friends, yes, the Palace!) and bought seats in Row L on the floor. 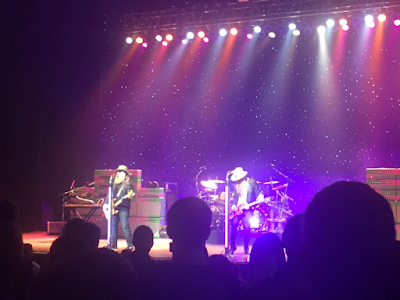 Fun story: although I had never seen ZZ Top, Aaron had seen them twice before, albeit nearly 30 years ago. One night many moons ago, Aaron and his friend Mike were at a blues bar in Cincinnati where they watched a group called Big Alice and Unfinished Business. After the show, they played some pool and a couple guys came in and put quarters down on the table. Those guys were Dusty Hill of ZZ Top (left in the above picture) and a road manager. So yeah, Aaron played pool with 1/3 of ZZ Top.